LowKickMMA.com
Home Combat What is MMA? 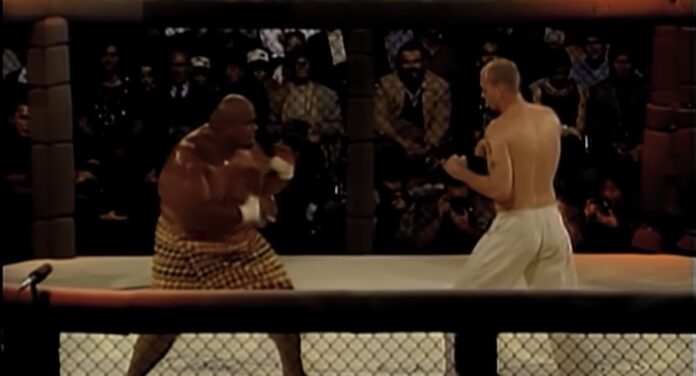 MMA has had a meteoric rise over the last few decades. Which is remarkable, because at multiple points the UFC was on the verge of closing, but they persevered.

But for those that have never watched the sport might wonder, what is MMA? We’ve put this article to explain what exactly is the sport of mixed martial arts.

Going through a quick history of the sport and details the rules and guidelines of MMA.

Before we get too far into the write up, let’s go ahead and answer the question of what is MMA? MMA or mixed martial arts is a sport that was developed 30 years ago and consists of multiple martials arts.

Everything from boxing, Jiu Jitsu, Muay Thai, wrestling, Karate, and Judo are all used within mixed martial arts.

In its nearly 30 year history, the sport has become internationally popular. Not only watched by millions, but now also practiced by many as well.

Before the sport of MMA was formed, there were various early forms of the sport done across the world. Particularly in Brazil and Japan.

Without the nation of Japan, the martial arts of Judo, BJJ, and Karate would not exist. Since Japan was a hotbed for martial arts, many of these practitioners would battle each other.

Particularly with Judokas that had a long standing rivalry with catch wrestling practitioners in the early 19th century. Some of these early matches between different martial artists would be under mixed rules contests or no rules.

When many look at how modern MMA was formed, they point directly at Vale Tudo fights that took place in Brazil. Vale Tudo was basically an early version of the early UFC events, where there were no rules or gloves used.

Fighters from different backgrounds like BJJ, Muay Thai, Judo, and Capoeira would compete against each other in these Vale Tudo events. Testing their skills to see which martial art was the superior form of fighting.

These Vale Tudo fights were how Brazilian Jiu Jitsu established itself as an effective martial art. They also inspired Rorion Gracie and Art Davie to create the Ultimate Fighting Championship. Later forming what we know today as modern MMA.

The creation of the UFC

Early MMA in the US would start to be established thanks to the Ultimate Fighting Championship being created. Rorion Gracie and Art Davie, and Bob Meyrowitz came together to found the promotion.

Originally it was Rorion’s idea to create the UFC as a giant commercial for Gracie Jiu Jitsu. Setting up a no holds fighting tournament between different martial arts like they would do in Brazil.

Art Davie would fund the idea and Bob Meyrowitz would put the event on early pay per view. The first event was held in Denver, Colorado on November 12th, 1993.

The creation of MMA

This is why the promotion gradually started adding rules into the fights. Everything from legal techniques and gloves began being implemented over a few years span.

Then before they knew it, the sport of mixed martial arts(MMA) had been established.

Who created the term MMA?

When telling someone what MMA is, they often ask how the name was created? The person often credited with coming up with the term mixed martial arts(MMA) is Big John McCarthy.

During his early days as a referee, Big John was also a police officer for the LAPD. To go ref fights, he needed to fill out a form with the LAPD to be granted permission.

How were the Unified Rules of MMA established?

The Unified Rules of MMA were established in 2001 at a meeting organized by the New Jersey State Athletic Commission. During this time, every promotion had their own set of MMA rules and it was hectic for commissions to oversee.

That is why the head of the New Jersey State Athletic Commission called a meeting of all the major MMA promotions. He would only permit these promotions to run shows in New Jersey if they set up official rules for the UFC.

After hours of debating, they all agreed on what we now know as the Unified Rules of MMA.

The Rules of MMA

When describing to someone what MMA is, you have to explain the rules of the sport. Here is a quick breakdown of the rules of MMA from the Unified Rules of MMA.

The Fighting Areas of MMA

MMA fights take place in two specific fighting areas. Either a cage or a ring.

Cages are synonymous with MMA. Hence the term cage fighting that is often used when talking about MMA fights.

All of the major MMA promotions use cages with the most known cage being the UFC’S octagon.

The 8 sided cage that the UFC holds a copyright on. Due to this copyright, only the UFC is allowed to use a cage with 8 sides for their events.

Other promotions generally use a circle cage, which no MMA promotion has a copyright claim on.

The classic ring was the fight area most used by the Japanese promotion Pride Fighting Championship during its era. Extra ropes would be added around the ring to try and prevent fighters from falling out.

Today cages are predominantly the main fight area used in MMA fights due to their practicality. But there are some promotions like One Championship that sometimes use a ring for MMA/Muay Thai events.

In the sport of mixed martial arts there are four promotions that are considered the top of the sport.

The UFC is head and shoulders above all other MMA promotions in the world. No other even comes close to the revenue and ratings that the promotion receives.

After being founded in the early 1990s, it was the UFC that started laying the groundwork for the sport of MMA. The owners realized that the no holds barred style of fighting was not a sustainable business model.

This is why they began making MMA into a legitimate sport to make it more palatable to a mass audience. Fast forward nearly 30 years later and the UFC is the premiere MMA promotion in the world.

Second behind the UFC is Bellator MMA that was founded by Bjorn Rebney in 2008. They initially had a tournament style format where fighters would compete for prize money and belts.

Bellator used this format for years until Rebney was replaced by Scott Coker, who went with a more traditional approach. Today Bellator is aired internationally and holds fights throughout the US, Europe, and Israel.

So what is MMA today?

Today, MMA is one of the fastest growing sports in the world with millions of fans all across the world. All tuning in every one month to see some of the best MMA fighters in the world compete against each.

But that isn’t just what MMA is today. Mixed martial arts is now so much more than just a sport. MMA has actually become its own martial art that is practiced by millions worldwide.

It changed the way people look at martial arts. Now people know that they must know how to fight on the ground, as well as from standing.