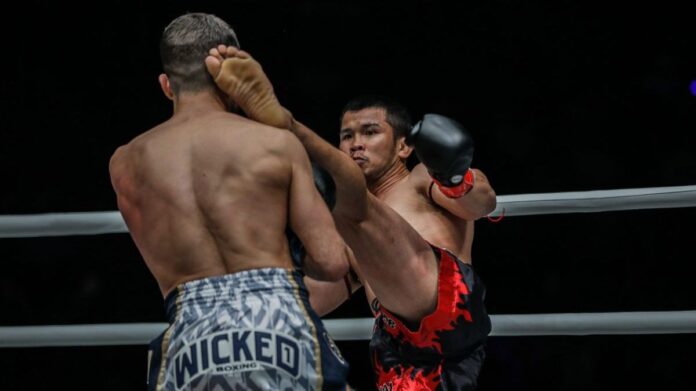 “Stand in front of your opponent and throw straight punches and kicks until your opponent’s head pops up like a Rock ‘Em, Sock ‘Em Robot,” said no trainer in the history of Muay Thai. Even at a rudimentary level of training, fighters will have a grasp of the importance of movement and angles. As practitioners develop their levels of skill beyond the novice ranges, the complex movements and angles of their attack, and anticipation of their opponent’s become more refined.

As with any combat sport based on striking, the object of the game is to hit and not get hit. While some fighters develop an attacking game which relies heavily on pressure, power, and wearing an opponent down, others base their offense on lateral movement, precision, and fighting smart. What both should have – especially in Muay Thai – is a developed sense of the variety of ways to hit and not get hit.

In order for a fighter to figure out an opponent and establish a rhythmic pattern to their attack, they must understand the mechanics of their opponent’s. Landing strikes is easier said than done against a seasoned Muay Thai fighter well-versed in the art of lateral movement, slips, and setting traps for their opposite number. Inside the ropes, it is generally the smarter fighter who wins, not necessarily the largest or more powerful.

The Importance Of Footwork

If you are under the impression that any fighter is going to stand stationary and allow themselves to be pummelled, think again. A Muay Thai fight is essentially a brutal chess match, where you will need to be prepared to use every weapon you have with your opponent. If you, on the other hand, expect to simply stand still and exchange – hoping to bargain for the same from your opponent – you won’t last very long.

Footwork is essential for Muay Thai fighters to find their range, evade shots, and launch attacks from. In an offensive sense, it allows for a fighter to work his way inside and find dominant angles to reach his target. By using slips, feints, and lateral movement, the fighter works his way around the target, eventually gaining access through his guard to land a knockout blow or soften the opponent up.

Without an understanding of how footwork contributes to offense, a fighter will have no frequency of control in the distance between him and his opponent. No distance control leads to uncertainty in attack, which allows an opponent to pressurize and force a fighter back against the ropes. Without a handle on straight, circular, angular, and serpentine movement, the fighter is effectively a predictable target to be manipulated.

One of the masters of creating dominant angles is Muay Thai legend Saenchai. The fluidity and perfect harmony between the top and bottom parts of his body – in addition to an incredible fighting IQ – allows him to manipulate his opponents, sometimes seemingly at will.

What stands out in the clip above is the way Saenchai used speed and variety to find these angles at his opponent’s expense. There is no predictable or stuttered movement, which is as far away from linear as one can get.

Linear and predictable angles of attack are dangerous for two reasons:

Watching two elite Muay Thai fighters attempt to work each other out will teach you everything you need to know about angles. Muay Thai is an art and one which is practiced by many who started exceptionally young. Their offensive prowess can often only be effective once a window has been opened to allow them to get inside.

The way to create these dominant angles comes down to the execution of basic factors such as:

Cutting Off The Ring

When combating an evasive fighter, the worst thing you can do is chase him around the ring. If you adopt this approach, you will be in for a very tiring and frustrating night. Likewise, simply charging at him in a straight line is not going to yield the results you want, as the opponent can sidestep and pivot out of striking range. The key to keeping a fighter where you want him is to move sideways to cut the ring off.

Cutting off the ring can also limit the distance between you and your opponent. In order to protect yourself from an attack, you must also be prepared for kicks which come your way. Avoid placing too much weight on the lead foot, as this can lead to being in an awkward position if your opponent throws leg kicks to attempt to move out of range.

Much the same as evasive fighters rely on their reflexes to avoid sustaining damage, an attacker looking to cut the ring off must learn how to deal with incoming strikes from an opponent aiming to avoid being trapped in. Learning how to slip punches, block kicks, and reset are fundamental in this regard.

While the information above may appear to be overwhelming at first glance, with the right dedication and commitment, it will become second nature over time.