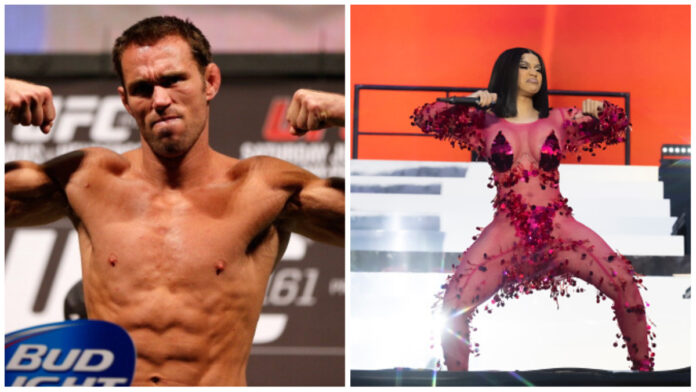 While not a usual topic of discussion in the MMA world, Cardi B is making waves due to her response to insults by former Strikeforce champion Jake Shields on Twitter.

Shields, a veteran of major MMA promotions like the UFC, PFL, and Strikeforce, is known for being outspoken. His Twitter tirade turned to that of misogynist Andrew Tate getting banned from social media, and he didn’t hold back when sharing his opinion.

“People are freaking out about young boys looking up to Andrew Tate but totally fine with young girls looking up to Cardi B and the Kardashians,” Jake Shields began. “Tate’s main message is stop being lazy and making excuses and go work hard and get in shape and make money.”

“Cardi’s is go do drugs,” Shields continued. “F*** random men and go through life as a brain-dead moron.”

Harsh words, and it’s worth noting that Jake Shields came under heavy fire for supporting Andrew Tate. A man who is a self-confessed “misogynist” with some sickening views on women. However, for some reason, Shields defends the man. Going so far as to top off his tirade with a final attempt at defense on Tate’s behalf. “Dozens of rapers have songs glorifying murder,” He said. “But Andrew Tate’s the biggest problem.”

Cardi B claps back at Jake Shields

In a now-deleted tweet, the New York City native would share her thoughts on the situation, and respond to the former Strikeforce champion. “I’m married,” the rapper said. “I don’t smoke weed, I don’t pop pills, I don’t do coke, I’m a mom of 2 and I do a lot of charity work.”

“…But hey,” she continued. “Let me put Cardi into it to defend a man who defends misogyny and rape.”

As far as Andrew Tate goes, he’s been quoted to have said women are property, and similar to dogs. “If I have responsibility over her, then I must have a degree of authority,” Tate said in a Youtube video, according to BBC News. “You can’t be responsible for a dog if it doesn’t obey you,” he concluded.

Unsurprisingly, with poor views such as those, Tate has come under fire seemingly worldwide, a prime factor that lead to his social media accounts being banned.

The misogynistic views of Tate are definitely not shared by anyone here at LowKick MMA, and we encourage everybody to treat people fairly regardless of race or gender.

What’s your take on the situation?