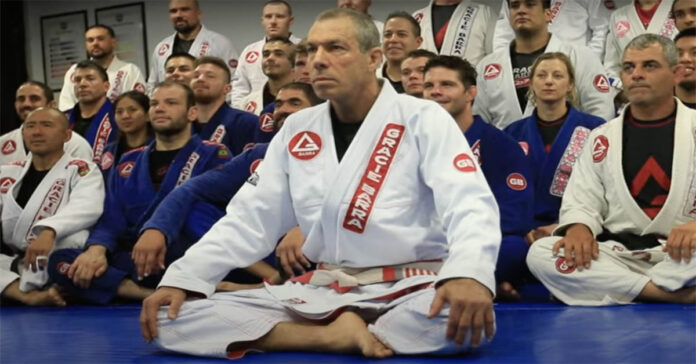 Carlos Gracie Jr is one of the most important figures in modern-day Jiu Jitsu. He has done everything from growing the world’s biggest BJJ affiliation to the biggest BJJ federation.

Here is the full story on Carlos Gracie Jr and how he grew his Jiu Jitsu empire. Starting from his early training with his half-brother Rolls, taking over the academy, and creating Gracie Barra.

Carlos “Carlinhos” Gracie Jr is the twenty-first child of BJJ co-founder Carlos Gracie Sr. From an early age, he started training Jiu Jitsu with his Uncle Helio Gracie until he was a teen.

One of the people that Carlinhos looked up to the most was his brother, Rolls Gracie. He adopted Rolls’ views on the importance of cross-training and always improving his abilities.

This would lead to Carlos Jr. also learning amateur and Sambo along with his Jiu Jitsu. Gracie would even take part in those competitions to improve his Jiu Jitsu.

When Carlinhos was a teen, he was already running classes at the Gracie Academy. His Uncle Carlson also ran classes within the academy but kept them separate from Jr.’s classes.

He would continue running his class while he enrolled in college. This was when his brother Rolls would come to him with an off.

Rolls had opened his own Jiu Jitsu school in Copacabana and asked Carlinhos for help. Since the university was near the school, Carlos Jr. gladly accepted his brother’s offer.

Whenever Carlinhos wasn’t studying, he was on the mats teaching and training. In 1977, Rolls would ask their Uncle Helio to do the honors and promote Carlos Jr. to black belt.

The Gracie family would suffer a tragedy in 1982 when Rolls Gracie passed away in a hand gliding accident. Carlos Jr. and the rest of his family were devastated by the loss of the then spiritual leader of the family.

After the funeral, Rolls Gracie’s wife approached Carlos Jr to take over Rolls’ academy. Encouraging Carlos that Rolls would’ve wanted him to keep the gym running.

A distraught Carlinhos would take over his brother’s academy and grow it exponentially.

After taking ownership of his brother’s Jiu Jitsu school, he decided to open a gym in another location. He would choose the then small suburb Barra da Tijuca in the west zone of Rio de Janeiro.

At the time, Barra da Tijuca was still developing and had poor access to central Rio. Everyone in Carlinhos’ life told him this was a bad idea, but he continued with his plan.

He would not come alone as many of the students from Rolls’ school would follow him. This included the Machado brothers and various other future BJJ legends.

Gracie would receive help from numerous family members and friends to start his new school. Most notably, Crolin, Rillion, and their friend “Ze Beleza” Jose Teixeira.

In 1986, the first Gracie-Barra Jiu Jitsu school opened in Barra da Tijuca in 1986. Carlos chose this name to differentiate his school from the other Gracie Jiu Jitsu schools.

People would also refer to him and those that train there as the “Gracies da Barra.” Carlinhos liked the name and would call the school Gracie Barra.

The Early Expansion of Gracie Barra

The gamble to put a Jiu Jitsu school in Barra da Tijuca quickly paid off for Carlos Jr. The suburb became one of the fastest growing areas in Rio de Janeiro, and Gracie Barra grew along with it.

When Carlinhos first opened his school, he barely had 20 students. A year after opening Gracie Barra, he would have over 200 students in his academy.

These first students of Carlos Jr. would later help Gracie Barra become the biggest Jiu Jitsu affiliation in the world.

By the early 1990s, Carlos Gracie Jr. had become one of the most prominent members of the Jiu Jitsu community. He would even begin organizing his own BJJ competitions in Barra.

This would lead Carlinhos, along with Ze Beleza and Jean Jacques Machado, to create their first Jiu Jitsu situation. They called it the “Associação de Jiu Jitsu da Barra”(Jiu Jitsu Association of Barra).

Their association would run numerous successful competitions at the Veiga de Almeida campus in the suburb.

The organization would rapidly expand and become a national Jiu Jitsu organization. Carlinhos and his partners would call their new national federation the Confederacao Brasileira de Jiu Jitsu(CBJJ).

Gracie would make himself the president of the CBJJ, becoming Brazil’s main Jiu Jitsu federation.

In 1994, Carlos Gracie Jr. would help create a Jiu Jitsu magazine called Jornal Gracie. The magazine was a way to advertise upcoming competitions and bring Jiu Jitsu to a bigger audience.

Gracie made this magazine with the help of his student Luca Atalla. Jornal Gracie was well received and quickly grew in popularity through its first few years of printing.

The magazine would later change its name to Gracie Mag to appeal to an international audience. Since being established in  1994, Gracie Mag is considered the premiere magazine for Jiu Jitsu-related content.

Today, Gracie Mag is still the most bought magazine and is now available online.

Carlinhos and the CBJJ board wanted to take their federation to an international level. This would lead to the creation of the International Jiu Jitsu Federation in 2002.

Thanks to the creation of the IBJJF, the organization was able to organize international events. Leading to major championship events in the US, like the Pan Championship games.

The Jiu Jitsu World Championship would be held in Long Beach, California. At the famous Walter Hall Pyramid, which has held every world championship event since the late 2000s.

The IBJJF Expands To Europe and Asia

Now that Jiu Jitsu has grown to an international level, people are training in every country within Europe this has led Carlnhos’ IBJJF to create even more events to meet the demand.

There is now a huge Jiu Jitsu boom happening within Asia. Leading to the IBJJF creating various championship events in different countries around the continent.

The growth of the IBJJF has been massive, and it’s head and shoulders above all other Jiu Jitsu federations worldwide.

The Growth of Gracie Barra

In the thirty-six years of Gracie Barra’s existence, Carlos Jr. could’ve never imagined his school’s growth. It is by far the biggest Jiu Jitsu affiliation in the world.

Nearly bigger than all other Jiu Jitsu affiliations combined.

Twelve years ago, Carlos Gracie Jr. received his black and red coral belt in Jiu Jitsu. A Jiu Jitsu rank signifies that he has spent over forty years as a black belt.

Carlinhos’ cousin Renzo Gracie would do the honors of preceding over the graduation and awarding him with his coral belt.

Just a few years after receiving his coral belt, Carlinhos would receive another honor. He would receive the extremely rare 8th-degree promotion to the red and white belt.

Gracie was given this honor during his 48th year as a BJJ black belt. The second highest rank in Jiu Jitsu that anyone can receive.

The Legacy of Carlos Gracie Jr

Carlos “Carlinhos” Gracie Jr. is arguably the most important ambassador for Jiu Jitsu in the history of the martial art. Not only for creating Gracie Barra but for co-founding the IBJJF.

Through the IBJJF, Jiu Jitsu competitions were able to be taken to an international level. Exposing not millions but billions of people to the martial art.

No one else has done what Carlos Gracie Jr. has done for Jiu Jitsu, and we all owe him our respect.