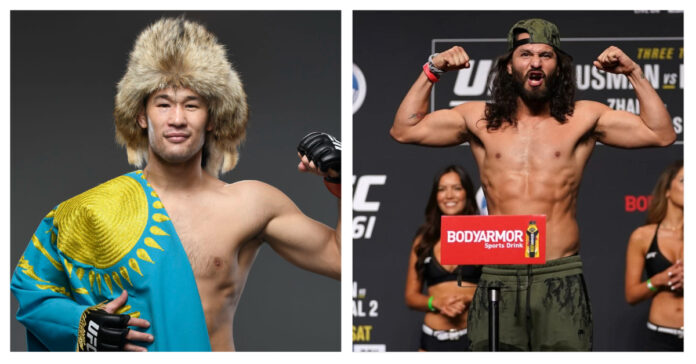 Shavkat Rakhmonov plans to extend his winning streak against either Nick Diaz, Jorge Masvidal, or Stephen Thompson after an impressive win on UFC on ESPN 38.

Rakhmonov entered his fight against Neil Magny as the betting favorite and didn’t disappoint. After a dominant first-round performance, where he largely out grappled Magny and landed solid ground and pound, he secured a guillotine finish in the second round with just two seconds left.

Afterward, Rakhmonov told Michael Bisping that he wished to fight Stephen ‘Wonderboy’ Thompson next, and later, in the post-fight press conference, he added a few more names to his wish list.

Shavkat Rakhmonov Puts On A Clinic Against Neil Magny

Shavkat Rakhmonov is one of the best up-and-coming fighters in the UFC and, so far, hasn’t shown any holes in his game. He has a perfect 16-0 record with 16 finishes. With his finish against Magny, he extended his UFC win streak to four, and all four wins came within the first two rounds. Perhaps the most impressive thing about Rakhmonov is that his 16 finishes are comprised of 8 knockouts and 8 submissions, making him one of the most well-rounded fighters in the game right now. Currently, Rakhmonov sits at number 15 on the UFC Welterweight Ranking, but he’s sure to take Magny’s spot in the top 10.

It seems like the next career move for Rakhmonov is to get some more notoriety as the three fighters he called out have large fan bases. However, Stephen Thompson is on a two fight losing streak and has yet to fight this calendar year. While Nick Diaz hasn’t fought since his loss to Robbie Lawler where he did not look his best to put it kindly. While Masvidal is in a middle of a lawsuit after allegedly assaulting Colby Covington and has recently expressed interest in fighting Conor McGregor.

So, it doesn’t seem like Shavkat Rakhmonov has a clear contender for his next fight despite his post-fight callout.