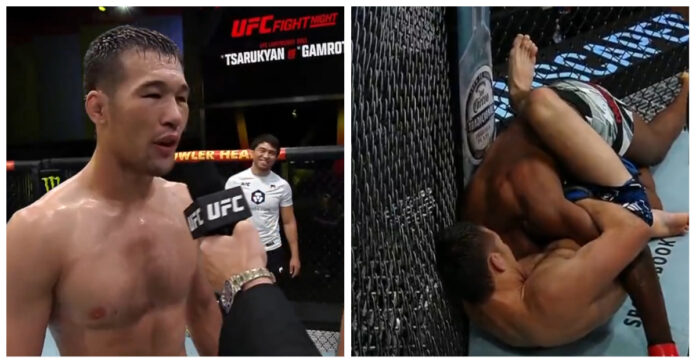 Shavkat Rakhmonov cruised his way to victory with a finish at UFC Vegas 57.

Going into the bout undefeated in 15 fights, Shavkat Rakhmonov was looking to work his way up the rankings as he took on Neil Magny, the tenth-ranked welterweight contender at tonight’s UFC on ESPN 28: Tsarukyan vs. Gamrot at the UFC Apex, Las Vegas, NV.

Rakhmonov’s bout with Magny served as the co-main event of the night. He secured a second-round finish with just two seconds left on the clock at the time of the submission. Both men opened the bout by exchanging kicks. ‘Nomad’ was able to get on top within a minute and delivered hard rights in the opening round.

Within a minute into round two, Rakhmonov would score a takedown and get side control. He threatened the guillotine from that point on and secured it in the final seconds as Magny tapped right before the bell.

Below, catch the highlights from Shavkat Rakhmonov’s submission win over Neil Magny