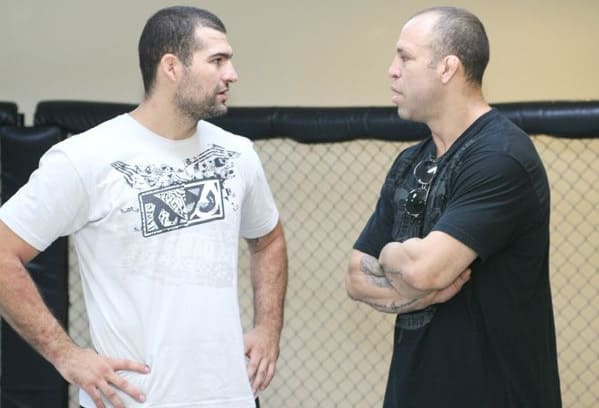 Many fighters say that the hardest part of fighting is the intense training, and we’ll continue to provide evidence to support that theory in the second installment of this three part series looking at some of the hardest hitting behind-the-scenes footage ever recorded.

And what better place to begin than a gym that’s infamous for their ‘iron sharpens iron’ approach to training – Chute Boxe.

PS. Don’t forget to check out part one here.

The Chute Boxe gym in Curitaba, Brazil was legendary back in the day for the wars that were reported to be taking place there practically on a daily basis between many of the top Brazilian stars at the time.

You can get a glimpse of what it must have been like here as two of their most famous products, Mauricio ‘Shogun’ Rua and Wanderlei Silva slug it out.

“Man, those (Chute Boxe) days were tough,” ‘Shogun’ recalled in an interview with UFC.com a couple of years ago. “But they were also great to forge us as fighters, and make us strong minded and confident, as well as aggressive and skilled.”

These days there’s a trend nowadays at certain gyms to focus less on ‘hard sparring’ due to fears that it takes too much of a toll on fighters and can affect their longevity in the sport at the highest level, but there’s no doubt that some of the most famous fighters of all-time found success via this method.

A key component of the Chute Boxe gym was undoubtedly former head coach Rafael Cordeiro who these days runs his own Kings MMA training center where he continues to oversee the careers of many stars, including current champion Fabricio Werdum and Rafael dos Anjos.

Cordeiro is a highly talented and decorated fighter in his own right and is not afraid to go hands-on in the gym as this series of clips shows.

The footage shows him more than holding his own while sparring with the likes of former UFC champion’s Anderson Silva and TJ Dillashaw, gives poor Matt Horwich a torrid time and even drops a few students with his deadly knee strikes!

When you’re coaching on the frontlines you’re always at risk of getting hit as Duke Roufus can testify.

Roufus is no stranger to taking a few blows to the head – he did have a decorated career as a kickboxer after all. However, he’d probably figured those days were over until this mitt work session with his star pupil, former UFC lightweight champion Anthony Pettis.

Everything was going according to plan until a stray punch from Pettis missed the intended mitt and instead landed flush to his coach’s kisser, knocking him flat on his back.

”I haven’t been knocked on my ass like that since about 2001!” Roufus admitted afterwards.

When a member of the public approached Josh Koscheck at an appearance back in 2007 saying that he wanted to fight him in the hope that it would lead to a career in the UFC he didn’t think too much about it.

However, a couple of weeks later when the guy started calling up Koscheck’s coach asking him to set up the fight at his gym, he began to take it a little more seriously.

Eventually one day the man with the blatant disregard for his own health and well being showed up at the American Kickboxing Academy gym ready to scrap, and Koscheck was only too eager to show him the error of his ways.

Cue a one-sided beating as Koscheck armbarred, head kicked and ground and pounded his opponent while barely breaking a sweat.

”I should have worked more on my cardio,” the young man mused afterwards, laying to rest once and for all the theory that you can beat sense into a person.

Former UFC champion Tito Ortiz got a little more than he bargained for when he agreed to a sparring session with Cris ‘Cyborg’ Justino back in 2009.

After a few minutes of grappling with the former Strikeforce and current Invicta FC 145lb champ, Ortiz looked to lock in a triangle choke finish.  However, ‘Cyborg’ showed her incredible strength by picking up and slamming the 220lb Ortiz.

Ortiz would go on to manage ‘Cyborg’s’ career for a time, and discovered that finding suitable training partners for her was a tricky business.

“We can’t get girls to spar with her because it’s too easy for her,” Ortiz told www.mmafightcorner.com in 2013. “We have to get guys to spar with her, that’s how it’s been for six months now. She hits like no other.”

Ronaldo ‘Jacare’ Souza is widely regarded as one of the very best Brazilian Jiu-Jitsu practitioners on the planet, but his striking has also come a long way over the years as this clip proves.

During this sparring session from 2015, ‘Jacare’ suddenly drops his opponent with a solid shot to the midsection that folds him like a cheap suit.

Training partners must dread going up against ‘Jacare’ as here is again dropping another unfortunate victim with the same body shot that is now becoming something of a trademark move for the Brazilian star.

That being said, submissions are still the former Strikeforce middleweight champion’s most effective weapon so far in his career, accounting for no less than 16 of his 18 career stoppage victories.

We’ve already mentioned in the last installment of this series the famous ‘Gracie Challenge’ to other martial artists and here’s another example of it in action back in the day.

In this instance another legendary member of the Gracie family, Rickson Gracie submits two much larger wrestlers in a row.

Some people believe Rickson to have been the best of the Gracie clan, and indeed it’s been reported that he was the man that was originally supposed to represent the family at UFC 1 before Royce Gracie was given that honor.

After breaking his leg in the Octagon the previous year, Legendary UFC fighter Anderson Silva was training for his comeback fight at UFC 183 against Nick Diaz when this video was taken.

Silva is seen sparring with fellow MMA pro Doug Moura when he suddenly bursts forward and lands a knee to the head that drops him, before following up with light ground and pound.

“”I wasn’t out, I was just dizzy,” Moura clarified later after the footage went viral.

It’s interesting to note that during his dominant run in the UFC, pound-for-pound great Jon Jones has yet to notch up a clean KO victory, but this video indicates that it’s a different story behind closed doors.

Despite all the eye-catching moves he unleashes in the Octagon, all it takes is a stiff jab here for Jones to KO his sparring partner at the Jackson’s MMA gym.

There’s no rest for the wicked though, with a new wide-eyed sparring partner quickly being rotated in to allow Jones to finish the round while the other still lies dazed on the mat!

It’s not completely out of the question that former middleweight champion Chris Weidman and recent welterweight title contender Rory MacDonald could fight for real in the UFC at some stage down the line which would definitely be a mouth-watering prospect.

For now though this footage of the two going at each other pretty solidly in the gym will have to suffice.

That brings us to the end of the second part in this series.  Stick around for the third and final part where we’ll dig deeper into the archives to bring you more fascinating gym footage caught on tape.