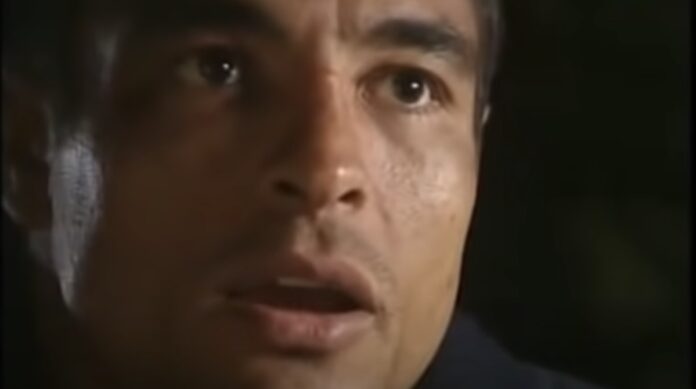 Rickson Gracie grew up in Rio de Janeiro and is the third oldest son of Brazilian Jiu Jitsu co-founder Hélio Gracie. From a young age, Rickson was picked as the next representative of the family.

Although before he began to train Jiu Jitsu seriously, Rickson Gracie almost took a bad path in life. During his pre-teen years, Rickson would routinely skip school and hang out in a favela in Ipanema.

In this favela, Gracie befriended some older kids that like to smoke marijuana and surf. Being young and wanting to impress the older kids, Rickson began getting pot for them.

This allowed him to be part of the group, but once they began stealing and using drugs, Rickson Gracie had second thoughts.

He knew staying would lead him down a bad path, so he decided to dedicate his life to training Jiu Jitsu.

When Rickson was young, his father was his main trainer, until he was a teenager. At this time his older relative Rolls Gracie took over as his teacher.

Rolls was a tough teacher that pushed Rickson hard. Every training session was like a fight and Rolls instilled a finish the fight approach into Rickson Gracie.

Forget about winning by points and always aim to finish his fights by submission. The young Gracie took this mindset to heart and it helped him succeed in Jiu Jitsu competitions.

In Jiu Jitsu competitions, it is said that Rickson never lost a match. He would almost always win his matches by submission and rarely get scored on.

Many at a young age already considered him among the best in the family.

Rickson would have his first vale tudo fight when he was just 19 years old. One day his father’s ex opponent and then friend Waldemar Santana came to visit the gym in Rio.

Santana was working as a fight promoter and was having problems finding his client Rei Zulu a fight. Zulu was allegedly 270-0 in vale tudo fights and was a mountain of a man with an indegionous wrestling background.

Hélio got excited and volunteered Rickson to challenge the undefeated Rei Zulu. Gracie was undersized and less experienced, but his father knew he would win.

His first fight was a grueling war in front of 20k spectators. Rickson Gracie weathered the storm of his bigger opponent for two rounds to the point Zulu was completely exhausted. This would lead to Rickson submitting Zulu with a Rear Naked Choke in the third round.

The two would have a rematch years later in a controversial match, where both men landed illegal blows. Their rematch would also end in Gracie choking out Zulu again.

Rickson Gracie and the beach fight with Hugo Duarte

During the 1980s, Gracie Jiu Jitsu was at war with a rival Vale Tudo school. The Vale Tudo school led by Marco Ruas won the initial meeting and negotiations began for Rickson to fight Ruas.

The fight never happened, but a bout with Hugo Duarte was offered and Rickson accepted. Although there were rumors that Duarte would back out.

So to prevent Duarte from avoiding the fight, Rickson confronted him at a beach in Copacabana. Rickson slapped Duarte to force him to fight and then proceeded to control Duarte on the ground.

This would continue the war between BJJ and Luta Livre, but Rickson would move to the US.

After moving to the US in the late 80s to work at the Gracie school in LA, Rickson mainly coached. Although he still stayed in shape and would still compete in various types of grappling tournaments from Jiu Jitsu to Sambo.

Then in 1994, he was contacted by catch wrestling expert Eric Paulsen. Eric was matchmaking for an early MMA tournament to be held in Japan called Vale Tudo Japan 1994.

He asked if Rickson would like to be the Jiu Jitsu representative in the tournament and Gracie gladly accepted.

At the tournament, Rickson would make easy work of his 3 opponents. Finishing his first fight by RNC and his last 2 by punches to win the inaugural tournament.

When Rickson won the first Vale Tudo Japan tournament, he began getting challenged by Japanese pro wrestlers. They were trying to make a name for themselves and trying to get publicity and attention on their promotion.

Rickson stated that he would never fight in pro wrestling, where the fights were a work. But if any Japanese wrestler wanted to fight him, they were welcomed to come to LA and try.

One young wrestler by the name of Yoji Anjo would make the trip to the US with members of the Japanese media. He and the promoter of the pro wrestling federation met Rickson at the Gracie academy in LA.

Gracie permitted Anjo and the promoter into the school, but not the Japanese press. When they got to the mat, the fight commenced and Rickson made Anjo regret his decision.

Anjo was brutally beaten for minutes before being choked out. There is a video of the incident, but Rickson has never released the video to the public.

He only showed it to the Japanese press one time to show them what really happened.

After winning the first Vale Tudo Japan tournament in 1994, Rickson was asked to fight again at the 1995 tournament. This time, his training would be documented on the famous documentary Choke.

This documentary showed Rickson’s preparation for the tournament along with two other competitors. Just like the previous tournament, Rickson won with ease by submitting all 3 opponents in one night again.

Rickson Gracie and the creation of Pride FC

Through the Vale Tudo Japan tournaments, Rickson Gracie had helped create the early MMA scene in Japan. He helped promote the inaugural Pride Fighting Championship event held at the Tokyo Dome in 1997.

Rickson would fight in the main event against Yoji Anjo’s teacher Nobuhiko Takada. Gracie made easy work of Takada submitting with an armbar in the first round.

Even though Takada lost, Rickson respected his spirit and gave him a rematch at Pride 4. The rematch would have the same result as the first with a win for Rickson by armbar.

Rickson’s last match would take place in 2000 against Masakatsu Funaki for the promotion CK. For this fight a special rule set of no elbow or knee strikes were added right before the contest.

Although this new ruleset didn’t really make a difference as Gracie took his opponent down and submitted him.

After this match, Rickson’s oldest son Rockson Gracie died of a drug overdose in December of 2000. The death of his oldest son broke Rickson’s heart and he no longer had the desire to fight.

Instead choosing to teach Jiu Jitsu and spend time with his family.

Rickson Gracie as a teacher

Kron Gracie was his father Rickson’s pupil from the time he could walk. In the early 2010s, Kron wanted to be a world Jiu Jitsu champion just like his dad.

He would get his chance after qualifying for the 2013 ADCC Championship. With his father Rickson in his corner, Kron made his way to China to compete at the event

The young Gracie easily won his first match against Andy Wang before meeting Garry Tonon in an all-time classic match. Kron was down on points before getting Tonon’s back and submitting him in the last few seconds.

Then in the finals, he met Otavio Sousa in the finals. He would win the tournament with a standing guillotine choke as Rickson watched on in his corner.

Rickson considered it one of the most special moments of his life to see Kron win at ADCC.

One of the keys to Rickson’s success was his strength and conditioning. His friend Orlando Conti taught Rickson his style of training called Ginastica Natural.

Ginastica Natural is a mix of natural movements, yoga, and breathing exercises. Rickson Gracie became a master of controlling his breath and heart rate.

He is well known for his famous breathing techniques that he has demonstrated frequently in films and documentaries.

In 2007, Rickson Gracie became only the 50th person to ever receive their red belt in Jiu Jitsu. He was surprised by his older brother Rorion at a seminar along with a few other red belts. Cementing his already great legacy.

There really isn’t anything to say about Rickson Gracie that hasn’t already been said. He is one of the greatest martial artists that have ever lived.

Not only being one of the best fighters ever, but also one of the best teachers. Rickson Gracie continues teaching the art he loves and has recently created his own federation. The Jiu Jitsu Global Federation.