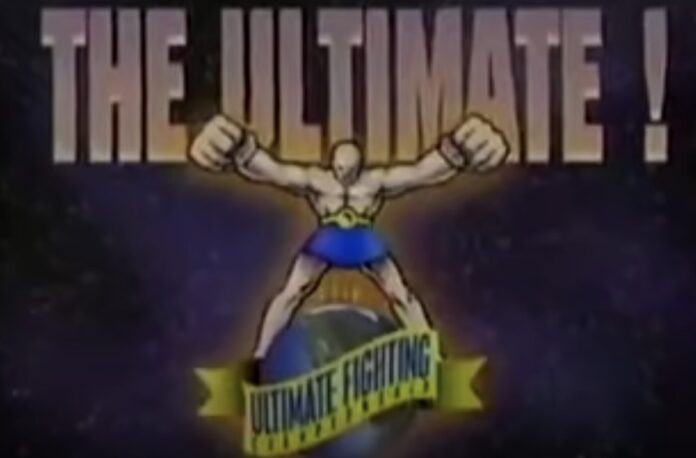 Pitting them against each other to see who was the world’s best fighter. Nobody that put UFC 1 together knew the history that they would be making.

What was originally created to promote Gracie Jiu Jitsu would actually lay the groundwork for the sport of MMA. Becoming one of the most popular sports in the world.

Here is our complete review of UFC 1. The fight tournament that started it all.

The creation of the UFC

The three people that were responsible for creating the UFC were Rorion Gracie, Art Davie, and Bob Meyrowitz. Of the three, who initially came up with the idea to have a no holds barred fighting tournament was Rorion Gracie.

For decades, the Gracie family had a standing bet within their Jiu Jitsu schools called “The Gracie Challenge.” An open challenge for anyone that wanted to test the effectiveness of Gracie Jiu Jitsu to fight at the academy.

Almost every time, the challenger would get easily beaten and sent home. Rorion Gracie wanted to take the Gracie Challenge and show it to a bigger audience.

He became a partner with businessman Art Davie. Through Davie, the two became partners with Bob Meyrowitz, who owned Semaphore Entertainment Group. One of the very first companies that would develop pay per view.

To prove the effectiveness of Gracie Jiu Jitsu, a no hold barred fighting tournament would air on pay per view. The winner of the tournament would receive $50k and be crowned the world’s best fighter.

UFC 1 was held at the McNichols Sports Arena in Denver, Colorado on November 12th, 1993. With a live attendance of 7,800 spectators.

The rules of UFC 1

The rules and regulations or lack thereof for the first UFC tournament were as followed:

The first Ultimate Fighting Championship tournament would be held in a circular chain link cage that was 30ft in diameter. This cage would be a symbol synonymous with the sport of MMA.

The commentators in charge of calling the action at UFC 1 were:

Rod Machado would give additional fight analysis, while Brian Kilmeade did post-fight interviews, and Rich Goins was the fight announcer.

The Gracie Jiu Jitsu representative and winner of the first UFC tournament was MMA legend Royce Gracie. Going into the tournament, nobody watching knew that the smallest participant would be the most skilled fighter.

Royce Gracie would go on to also win the 2nd and 4th UFC tournaments. Earning a MMA record of 15-2-3 and becoming the first inductee into the UFC Hall of Fame.

Another MMA legend and future UFC Hall of Famer that fought in UFC 1 was Ken Shamrock. Ken came into the tournament with a 3-0 MMA record in Pancrase and was a favorite to win it all.

Shamrock was an MMA pioneer that would have a 3 decade long fight career, where he made a lot of history. Earning a record of 28-17 and opening one of the very first MMA gyms in the US.(The Lion’s Den)

Coming into the tournament, Smith was a kickboxing champion. In his fighting career, Patrick Smith would compile fighting records of  20-17(MMA), 66-8(Kickboxing), and 5-11-2(Boxing).

His appearance at UFC 1 would be his one and only fight within the sport of MMA and continue boxing. Ending his boxing career in 2002 with a 33-18 record.

After UFC 1, Gordeau would compete at the Japan Vale Tudo Japan 1995 tournament before retiring from fighting.

Teila Tulli is a Hawaiian native, who was an ex sumo wrestler. In sumo, Tulli earned a record of 52-27-14 before retiring due to a knee injury.

His appearance at UFC 1 would be his only appearance in MMA and would then turn to acting. He is most known for his role in the comedy Forgetting Sarah Marshall.

Rosier had professional records in boxing and kickboxing going into the tournament. He would also appear at UFC 4 and retire with records of 2-6(MMA), 2-2(Kickboxing), 7-17(Boxing).

Zane Frazier was another contestant with a striking background in Karate and kickboxing. He would appear one more time fighting in the UFC at the UFC 9 event.

In his fighting career, Frazier would compile records of 17-2 in kickboxing and 4-11 in MMA.

Jason Delucia was a Kung Fu expert that competed as an alternate at UFC 1. He was also a practitioner of Taekwondo and Judo to go along with his expertise in Kung Fu.

Delucia would actually have a long and active MMA career after the event. Fighting in MMA for 13 years and earning a record of 33-21.

Trent Jenkins was the other competitor that fought in UFC 1’s alternate bout. He would compete 3 more times in MMA before retiring.

The first official fight in UFC history was the alternate bout between Jason Delucia and Trent Jenkins.

As soon as the bout started, Jenkins barreled forward. Delucia would look like he wanted to strike, but would shoot in for a very untechnical double leg takedown.

The Kung Fu expert would land the takedown and go to Jenkins’ back to lock in a rear naked choke. Jenkins not knowing how to defend the submission would quickly submit at just 52 seconds into the fight.

Jason Delucia would win the alternate bout, but would fight again in the tournament.

This would be the very first fight that would open the first ever PPV show. A Dutch kickboxer taking on a professional sumo wrestler.

As soon as the round started, Tuli rushed forward throwing palm strikes and looking to grab Gordeau. The Dutch kickboxer would side step the Hawaiian sumo wrestler as he fell to the ground.

He would then deliver a devastating roundhouse that would send Tuli’s tooth flying. Gordeau would hit him one more time before the referee stepped in within the first 15 seconds of the fight.

The second bout of the night would be between Kevin Rosier and Zane Frazier. This would be a bout between two strikers, but Rosier’s size would be the deciding factor.

Rosier would lumber forward and pin Frazier against the cage and began throwing a wild barrage of strikes. Frazier would go to the ground and absorb more strikes from Rosier before his corner threw in the towel.

The third fight of the opening round would be a grappler vs boxer match up. In the rules of the tournament, gloves weren’t required, but Jimmerson would wear one boxing glove.

Many spectators, who knew nothing about grappling, assumed that Jimmerson would destroy Royce. They would be in for quite a shocking surprise.

Royce would quickly get Jimmerson to the ground and would take mount on the boxer. Gracie would had complete control over Jimmerson and the boxer would submit from pressure at the 2:18 mark.

The last bout of the opening round would be an interesting one between Ken Shamrock and Patrick Smith. What would decide this bout would be the grappling experience of Shamrock.

When the fight started, Shamrock would lock up with Smith and get underhooks. He would hit a lateral drop to get the fight to the ground and ended up in Smith’s guard.

The two would trade rabid punches and headbutts before Shamrock stood up and fell back for a leg lock. Putting on a tight heel hook that would force Smith to tap at the 1:49 mark.

Gordeau had the quickest fight of the opening round and was the freshest of all of the fighters.

Both fighters were strikers, but Gerard’s abilities were clearly superior to Rosier’s abilities.

The Dutchmen would walk Rosier down and would begin landing vicious leg kicks. He would land a few more hard strikes that would send Rosier to the mat.

Gerard would end the match with hard stomps to Rosier’s body before the ref stepped in late. The Dutch kickboxer would win the first semi final fight and punch his ticket to the tournament finals.

In the second semi final match, Royce Gracie and Ken Shamrock would face off in a bout between grapplers. Once again, Gracie found himself in the underdog role as everyone assumed the bigger Shamrock would dominate him.

Everyone would once again be proven wrong by Royce. Ken admittedly came into the semi finals over confident and underestimated the young Jiu Jitsu fighter.

As soon as the fight started, Royce would latch onto Shamrock and get him to the ground. Royce would move to Ken’s back and lock in a tight rear naked choke at just 57 seconds into the fight.

Sending him to the finals to meet kickboxer Gerard Gordeau.

The final fight of UFC 1 would be a match between a grappler and a striker. Both fighters were undamaged and had fairly easy paths to the finals and were well rested and ready to fight.

When the fight started, Gracie wasted no time in clinching Gordeau and taking him to the cage. Once there he would control the Dutch kickboxer up and take him to the ground.

Royce would then take Gordeau’s back and the Dutchman would actually bite Gracie. This enraged Royce as he locked in a rear naked choke and had to be forcefully pulled off by the referee.

The winner of the very first UFC tournament and the $50k dollar prize was the young Brazilian, Royce Gracie.

As a pay per view, the first UFC was a failure as only 86,000 people would buy the show. But the UFC 1 tournament was also released on home video, where the majority of future fans and fighters saw the event.

Royce Gracie’s performance would help Jiu Jitsu gain international exposure and exponentially grow the martial art. The first UFC tournament would also lay the ground for the sport of MMA. Later becoming one of the biggest sports in the world.