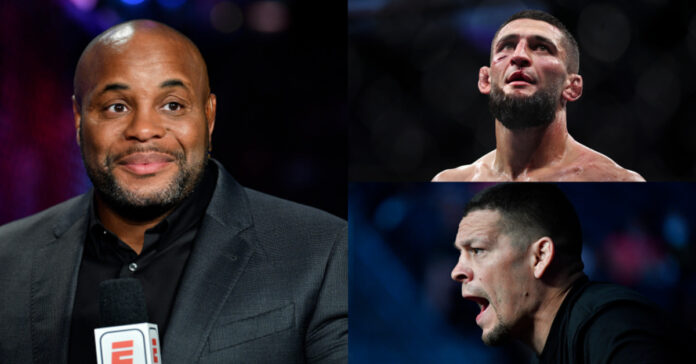 In the UFC 279 main event, the Stockton native will compete in what is the final fight of his current UFC contract. After months of lobbying for a fight to get out from under the UFC and President Dana White. This led to him accepting a fight with fast-rising welterweight challenger Khamzat Chimaev. After defeating Gilbert Burns at UFC 273 in April, the Chechnyan-born fighter skyrocketed his way up into the No. 3 spot in the welterweight rankings.

Everything seemed to be lining up for a welterweight world title showdown between ‘The Nigerian Nightmare’ Kamaru Usman and Khamzat Chimaev. Then Leon Edwards’ kick heard around the world happened. With Chimaev’s title opportunity seemingly delayed with talks of a trilogy bout between Usman and Edwards dominating headlines, Daniel Cormier questioned what the point the UFC 279 main event serves on his ‘3 rounds with DC!’ podcast.

“I think last weekend he did not understand that he (Chimaev) was the biggest loser in the Usman versus Leon situation because he was in line. All he had to do was get past Diaz. All he had to do, get past Diaz, you fight for the championship, but with Leon Edwards winning now, now we got a trilogy and rightfully so.

“That leads to the question, what is this fight for? I feel like for Diaz, this fight is for legacy. I feel like for Chimaev, this is just another scalp on his resume because I don’t know if this win necessarily puts him closer than he already is to a championship fight. And, because of the result last weekend, he’ll need one more. I just wonder who that one more is going to come against. If he beats Diaz, does he get Covington next?”

The general consensus is backing Khamzat Chimaev to send Nate Diaz out of the UFC with a loss. As Leon Edwards proved, anything can happen in MMA, but assuming the undefeated welterweight gets past the man from Stockton, CA, what comes next? Depending on how long Kamaru Usman needs to recover, it’s possible, though highly unlikely that Chimaev could step in and take the next shot. The more likely scenario is a showdown with division gatekeeper Colby Covington.

The last time we saw ‘Chaos’ inside the Octagon, it was at UFC 272 in his high-profile grudge match with frenemy Jorge Masvidal. Covington’s only two losses in the last six years have been to Kamaru Usman. It would be an intriguing match-up for the undefeated Khamzat Chimaev. Not only would it be a huge test for the Swedish superstar, but it would also solidify his position as the true challenger for the winner of Edwards vs. Usman III.

Of course, we can never count out Nate Diaz who could create utter chaos in the welterweight division on his way out of the UFC, should he get the best of Khamzat Chimaev on September 10th.