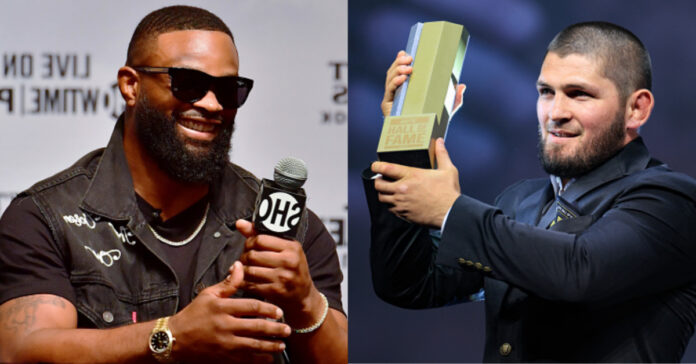 Former UFC welterweight champion Tyron Woodley is not convinced of Khabib Nurmagomedov’s lightweight GOAT status. In fact, ‘The Chosen One’ wouldn’t even put ‘The Eagle’ in his top-10 of all-time greats.

During an appearance on Jake Pauls’s BS Show, Woodley shared his thoughts on some of the greatest fighters in UFC history. When Nurmagomedov’s name popped up, ‘T-Wood’ quickly dismissed him from the list.

“[Khabib] on my top 10 list? Probably not. I f*ck with Khabib. I like him, I respect him a lot. I think he’s a good fighter,” Woodley said. “I think his type of fight for that weight class (lightweight), nobody could do that besides Sean Sherk back in the day. But, like, he was just really aggressive, but I didn’t see the wrestler with good hands fight him so I couldn’t really jump on that train.”

Following a second-round submission of Justin Gaethje at UFC 254, Khabib Nurmagomedov called it a career after just three defenses of the lightweight championship he won two and a half years prior. Ending his career at 29-0, including 13 straight wins inside the Octagon, many still consider Nurmagomedov one of the greatest to step into the cage. However, there are those that side with Tyron Woodley in his belief that Nurmagomedov’s strength of schedule was lacking true competition outside of his last three fights against Conor McGregor, Dustin Poirier, and the aforementioned Justin Gaethje.

Who Is on Tyron Woodley’s List of the Greatest Fighters?

Tyron Woodley is justifiably unconvinced of Khabib Nurmagomedov‘s status as a GOAT in the sport of MMA. That begs the question, who is on Woodley’s list of the best of the best? Speaking to Paul, ‘The Chosen One’ shared a few names that shouldn’t be too surprising. Former light heavyweight champion Jon Jones was an obvious choice for Woodley, as was Demetrious Johson who just added the ONE lightweight world championship to his resume with a spectacular fourth-round flying knee knockout of Adriano Moraes at ONE on Prime Video in August.

Next up was Georges St-Pierre who reigned over the UFC’s welterweight division at the same time as Woodley’s other namedrop, Anderson Silva. ‘The Spider‘ was nothing short of dominant during his middleweight title reign and still holds a plethora of UFC records in the division, including the most consecutive title defenses, most knockdowns, and most finishes. He also has the longest win streak in UFC history, winning 16 straight while holding the middleweight world title for an incredible 2457 days.

Since stepping away from the Octagon, Anderson Silva has continued to find success inside the squared circle. He successfully defeated boxing icon Julio Cesar Chavez Jr via split decision and will fight two-time Tyron Woodley opponent Jake Paul on October 29th.