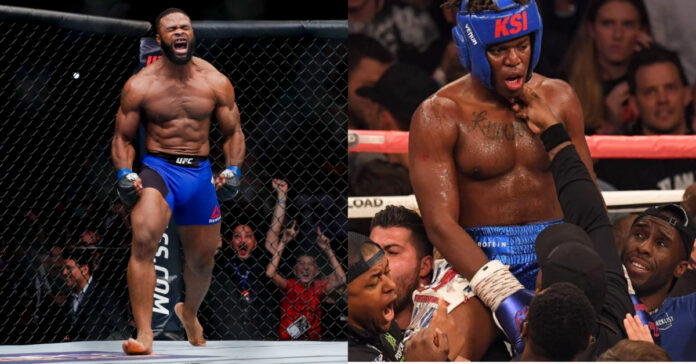 Tyron Woodley once competed and beat some of the best athletes within the UFC, dominating his opponents in the welterweight division. Reigning supreme over the rest of the division Woodley was the 170-pound champion from 2016-2019.

During his time with the promotion, Woodley would take the belt from Robbie Lawler at UFC 201 before going on to make three successful defences against the likes of Stephen Thompson, Demian Maia, and finally Darren Till.

Since retiring from the sport Woodley has ventured into multiple areas that the sports and entertainment world have to offer. Having made appearances in the Netflix series Cobra Kai that aspect of his life has been going extremely well. However, in his next sporting adventure, we cannot say the same.

Tyron Woodley fell short in his attempt to step into the world of Boxing when he faced YouTube boxer, Jake Paul. Woodley fell short via decision the first time round before being brutally knocked out in the pair’s second meeting.

Now it seems following his fall from grace people have forgotten just exactly who Tyron Woodley is, and with rumours circulating that ‘The Chosen One’ will be taking on internet sensation KSI in his next boxing bout the former welterweight champion is looking forward to silencing all his critics.

“Based on one mistake, it only takes one there’s been many guys on the other end that took that one mistake against me, and they lights got shut out. Robbie dropped his hands at the wrong time. Dong Hyun Kim caught a spinning back fist right, and Darren Till thought he was gonna bully me but I bullied him, right, so at the end of the day, KSI, I like that he’s energetic, he’s all into it, he’s all over the place, but he’s gonna get f–ked up playing around with me.” Woodley told TMZ Sport in a recent interview.  (Transcribed by MiddleEasy)

Do you feel Tyron Woodley would beat KSI should the pair enter the boxing ring together?