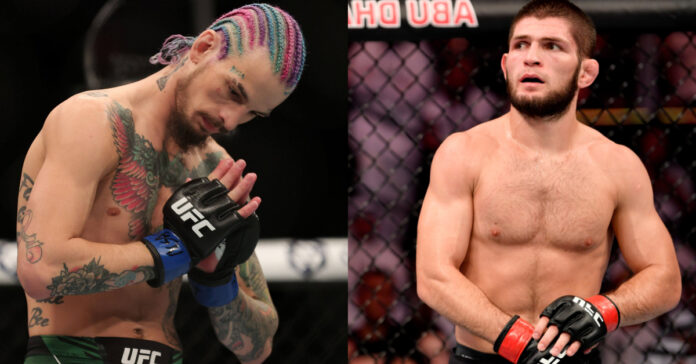 Sean O’Malley received major praise from Khabib Nurmagomedov who touted him as ‘that guy.’

The rising prospect is currently in preparations to take on former interim UFC bantamweight title holder Petr Yan in his biggest jump up in competition at UFC 280 on Oct. 22 at the Etihad Arena in Abu Dhabi, United Arab Emirates. After bursting onto the mainstream through Dana White‘s Contender Series, O’Malley goes into the bout looking to secure a shot at the gold.

While some have doubts about “Suga” Sean’s credibility as a top-ranked contender, former UFC lightweight champion Khabib believes that O’Malley has a bright future ahead of him. In a recent appearance on the popular podcast show Joe Rogan Experience, MMA documentarian and filmmaker Will Harris of Anatomy of a Fighter shared what Khabib said about O’Malley backstage during his Hall of Fame induction ceremony.

“I feel like Khabib has the best read on fights and fighters, his f**** IQ when it comes to fighters”, he said (ht Mirror). “When he was getting inducted [into the UFC Hall Of Fame] they asked him how good was O’Malley? It was me, DC [Daniel Cormier] and Ali [Abdelaziz] backstage and Khabib was like, ‘Sean O’Malley is that guy’ and if Khabib said that then Sean, he really got it. There’s something special about him.”

In an interview with Helen Yee, O’Malley reacted to hearing about the high praise from a bonafide legend of the sport.

“That’s cool, like I said about the high-level fighters when they talk about me versus Petr. I think high-level fighters see I’m a legit motherf**ker,” O’Malley said. “I’m not just fancy and do all this crazy sh*t, I have legitimate skills, so it was really cool, to be honest. I thought hearing something like that from Khabib is, you know, he’s one of the [greatest of all time], so that was really cool.”