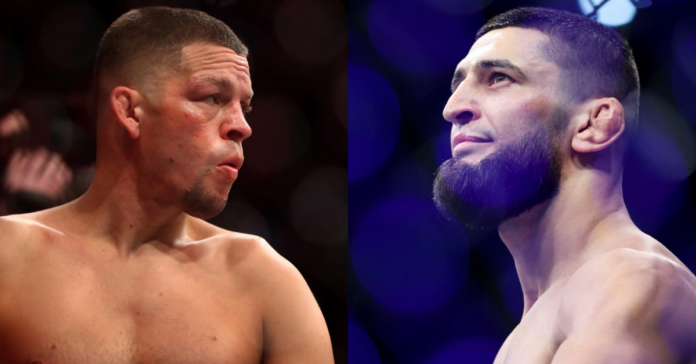 Nate Diaz is always ready to scrap. Whether in the gym, at a press conference, or in the cage, the Diaz brother is always prepared to throw down. On Saturday night he will compete in the main event of UFC 279 against the Russian-born Khamzat Chimaev. The US-born athlete will put this philosophy to the test in this welterweight fight because he said he did not even bother training for this match.

The UFC 279 headlining fight will be the final fight for Nate Diaz in the UFC. In the pre-fight press conference, the 37-year-old sounds as though he is mentally entirely done with competing in the organization. Diaz said:

“I gave up on preparing, it’s just whatever. Beat me … I think that I’ve been stuck in the cage for a long time, and I gotta do what I gotta do to get the f*ck out. Whether it’s fighting the toughest guy, the newest guy, whatever, you want to call him, or anybody, I’m just ready to rock and roll.”

The Stockton-born fighter said that he did not prepare for this fight and just wants out of his UFC contract. Some pundits have speculated that The Ultimate Fighter Season 5 winner is looking to walk out of the UFC to engage in a boxing fight against YouTube celebrity Jake Paul. When pressed on this, Nate Diaz did not directly say anything:

“I’ve heard a lot about a lot of stuff. Whatever comes after this, like I said, is going to be bigger than anything I’ve ever done”

Diaz recently founded Real Fight Inc., a combat sports promotion. He introduced himself to the UFC by winning season 5 of The Ultimate Fighter in 2007, and for much of his UFC tenure, was known best as the younger brother of Nick Diaz. The US-born fighter competed for the lightweight crown in 2012 and had two highly-rated bouts against the Irishman Conor McGregor.

See the full press conference with Nathan Diaz below:

Khamzat Chimaev does not think Nate Diaz will survive

‘The Wolf’ Khamzat Chimaev is sporting a perfect, undefeated record in MMA at 11-0. He was a national freestyle wrestling champion in Sweden before switching his focus to mixed martial arts. Since joining the UFC in 2020, he has won five consecutive fights including four by way of stoppage. The Russian-born athlete’s most recent win was over the former top contender Gilbert Burns. UFC 279 will be the first main event and five-round fight for Chimaev.

‘Borz’ Chimaev said in the pre-fight press conference that he believes his UFC 279 opponent, Nate Diaz, will not survive all five rounds on Saturday night. He said:

“I don’t think that [Nate Diaz] is going to survive one round. I hope he can survive five rounds. It’s good for him. Show his heart and go away from the UFC being a warrior. If I beat him first round everyone is going to say the guy is too old and ‘Uncle Diaz is going to have to go home‘ … I come here, don’t take the points, and play the games. I come here to smash somebody and take his head.”

How do you see Nate Diaz vs. Khamzat Chimaev playing out?