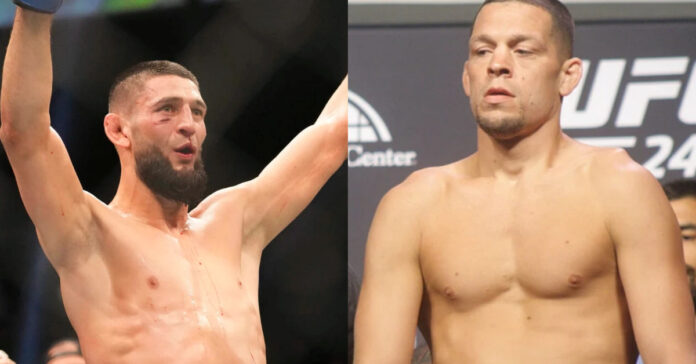 Khamzat Chimaev is concerned Nate Diaz would not be able to make it the full five rounds.

The rising prospect is slated to take on Diaz in the headlining bout of UFC 279 on Sep. 10 at T-Mobile Arena in Las Vegas, Nevada. Diaz goes into what could be his final outing under the UFC banner. Chimaev opened as a huge betting favorite with most people seemingly counting the grizzled veteran out.

During the Wednesday media day ahead of their showdown, Chimaev shared a prediction for his fight. While he does not see Diaz going past round one, he hopes the Stockton native can go the full distance.

“What he going to do? (The) fight (is) at 170,” Chimaev told MMA Junkie and other reporters at UFC 279 media day. “I can fight at heavyweight as well. I don’t think that guy is going to survive one round. I hope he can survive five rounds. It’s good for him. Show his heart and go away from the UFC being a warrior. If I beat him first round everyone is going to say the guy is too old and ‘Uncle Diaz is going to have to go home.’”

Chimaev is happy about the opportunity & will bring war

It will also mark Chimaev’s first main event fight, and that too on pay-per-view. Chimaev expressed his appreciation of the opportunity and stated that he will be ready for a war.

“All moments in UFC are big moments for me,” Chimaev said. “It feels amazing I’m fighting Nate Diaz. One of the guys who has been like 15 years in the UFC. One of the legends. Maybe it’s his last fight. Who knows. I’m happy. I’m going to go take his head off,” Chimaev said. “I come here, don’t take the points and play the games. I come here to smash somebody and take his head.”