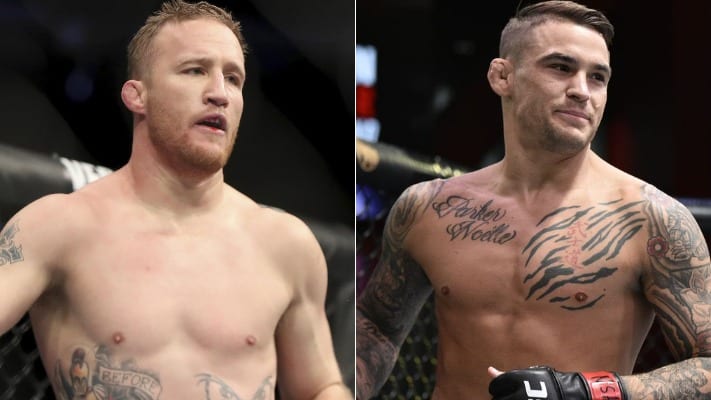 Justin Gaethje and Dustin Poirier got into a spat on Twitter, after the Highlight questioned the Diamond’s reaction to winning the interim UFC lightweight championship.

Heading into his highly anticipated title unification bout against Khabib Nurmagomedov, current interim champ Gaethje sat down for an interview with BT Sports. The interviewer brought up how Gaethje had responded to having the interim belt wrapped around him – by throwing it on the ground and telling UFC commentator Joe Rogan, “I’ll wait for the real one.””

“You saw when Dustin Poirier got that interim title wrapped around his waist… he was done, he made it,” Gaethje said. “You still had the biggest mountain to climb, and that’s Khabib. I think he really did not help himself at all there. Why would you feel that you made it or you’re the champion whenever it’s just an interim title?… The challenge is Khabib!”

The feud between the two fighters goes back to 2018, when Poirier defeated Gaethje by knockout in the 4th round. He would go on to pick up a win against Eddie Alvarez before claiming the interim title over Max Holloway, but ultimately fell short in his match against Nurmagomedov at UFC 242. That didn’t stop Poirier from reminding Gaethje what happened the last time they met, however.

Gaethje has since claimed the interim title over Tony Ferguson, following a string of victories over (the recently released) James Vick, Edson Barbosa and Donald Cerrone. He was quick to remind Poirier how they both looked after their fight.

Both men will have to put their beef aside for the time being. Justin Gaethje has his aforementioned titile fight to look forward to, while Poirier has an upcoming fight against Conor McGregor on January 23. That being said, it doesn’t look like either man would say no to a possible rematch down the road.

Do you think Gaethje was right to question how Poirier reacted to his interim title win? Let us know!