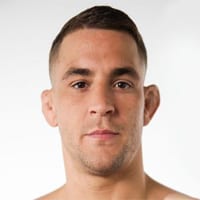 Dustin “the diamond” Porier grew up in Lafayette, Louisiana and grew up fighting. Throughout his child, he would constantly get into fights and it would lead him to drop out in the 9th grade.

With nowhere else to turn, he started training to become a fighter.

At 19 years old, Poirier would turn pro and primarily fought in promotions with the state of Louisiana. Going 7-0 winning all by stoppages within the first two rounds of the fights.

He would make his debut in the formerly Zuffa owned WEC in 2010 losing a decision against Danny Castillo. Poirier would fight one more time in the promotion winning by TKO before Zuffa absorbed the company into the UFC.

At the beginning of Poriier’s time in the UFC, he fought a featherweight and had lots of success. He won his first 4 fights including a submission win over future division champ Max Holloway.

After his fight, he would hit a few bumps losing to Chan Sung Jung and Cub Swanson. But Poirier would get back to his winning ways winning his next 3 fights after the loss to Swanson.

This would set up a grudge match between Dustin and Conor McGregor. A fight Dustin would lose by TKO in the first round.

Tired of cutting weight and wanting a fresh start, Dustin made the move to lightweight. It would seem like it was the right choice as he went 5-1 in his first 6 fights. Beating all top 10 contenders within the lightweight division.

His only blemish during his early lightweight fights was an upset KO loss against Michael Johnson. He would get back to winning his next fight and earn a decision over tough Jim Miller.

Poirier’s run to the title

After his first loss a lightweight, Poirier would go on a great run having FOTN performances. First against former division champ Eddie Alvarez that unfortunately ended in a no contest due to an illegal knee.

In his next fight, he would start his next winning streak stopping another former division champ in Anthony Pettis. This would set Dustin up against another dangerous opponent in Justin Gaethje, which was an absolute war. Poirier would fight back from almost being stopped to finish Gaethje by KO in the fourth.

With a huge win over Gaethje and Khabib under suspension this set up Poirier for an interim title fight. He would face featherweight Max Holloway in their second match against each other. Poirier would control most of the fight against Holloway earning his first title in the UFC.

For his next match, he would face the champ Khabib, who was fresh off his suspension from the Conor fight. This fight unfortunately would not go Poirier’s way as Khabib controlled him and eventually submitted Dustin in the 2nd round.

On top of being one of the best MMA fighters in the world, Poirier also runs a charity. It is something that is very special to him and frequently donates percentages of his fight purse to the charity. Also normally auctioning off his fight gear after his fights for his charity.

Michael Chandler Sorry For Being ‘Too Critical’ Of Dustin Poirier After...