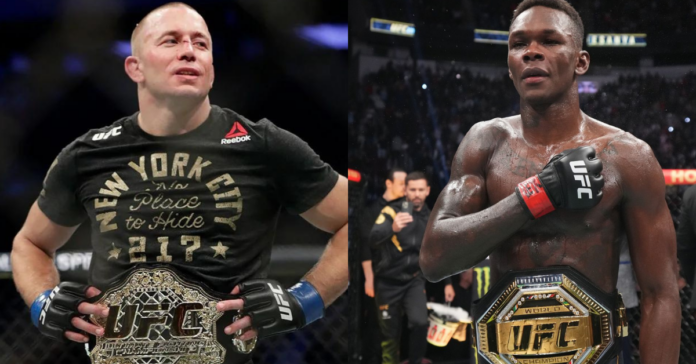 The greatest fighter in history Georges St-Pierre recently sat down with UFC middleweight king Israel Adesanya and gave the Nigerian-Kiwi some advice.

In a YouTube clip, the two UFC fighters sat down to dinner, and the Canadian great, and UFC Hall of Famer, shared some wisdom with ‘The Last Stylebener.’ He said:

“It’s good that you use [criticism] as a fuel to motivate you because it gives you more energy to prove them wrong, but don’t pass the line of doing this … Heavy is the crown my friend. And it’s just the beginning for you. Heavy is the crown. I’m honest with you. I like you. I’m telling you the truth; heavy is the crown. Nobody can understand, but it gets worse. It adds more weight to your shoulder every fight. Every fight is bigger and bigger, and the criticisms are worse, and the expectations are more and more. Keep that fire, man, because this journey can change you from the inside out.” [Transcript courtesy of MMA Weekly]

The video was shared by Israel Adesanya on his YouTube channel which viewers can enjoy below:

Pound-for-Pound Georges St-Pierre is considered the greatest MMA fighter of all time. His experience carrying UFC gold makes his sage wisdom all the more valuable. ‘Rush’ was young when defeated Matt Hughes in their meeting to capture the welterweight crown. The Canadian would later lose this illustrious title via TKO to Matt Serra. This loss helped mature the young fighter.

The Canadian-born athlete would later work his way back to an interim title and then later an undisputed title. In his second championship run, he went undefeated in nine consecutive fights. GSP would retire and make a later comeback at middleweight defeating then-champion Michael Bisping.

Israel Adesanya transitioned from a successful career in kickboxing to MMA. ‘The Last Stylebender’ captured his first UFC gold in 2019 and has won seven championship fights in total, including the interim title. The Nigerian-Kiwi’s only blemish is when he went up in weight to try to capture the light heavyweight crown from Jan Błachowicz.

Georges St-Pierre has much experience and wisdom to share with young fighters. He was a respected professional in MMA and it was not an easy path for him to rise to greatness.