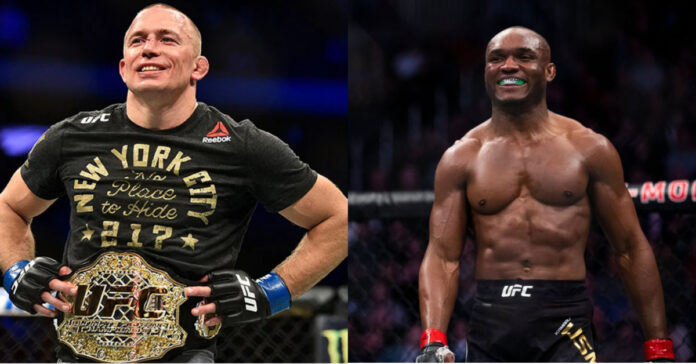 Former welterweight and middleweight champion Georges St-Pierre believes Kamaru Usman will have to overcome a mountainous challenge to rebound from his devastating KO loss to Leon Edwards.

Having dropped the first round Usman was able to respond way and comfortably take the next three rounds heading into the fifth and final. Usman was in control of the final round too for the majority and on his way to securing another successful title defence. That was until Edwards was able to land his perfectly executed with less than one minute remaining in the bout to secure himself the championship.

UFC Hall of Famer Georges St-Pierre knows the difficulty Usman will face if he wants to return to the pinnacle of the welterweight division himself. Having initially lost his belt to Matt Serra in 2007 Pierre would go on to win the belt of Matt Hughes later in the year and then overcome his greatest challenge by beating the man who took the belt from him in the rematch just over one year later.

“Kamaru was winning the fight, but he made a crucial mistake that is unforgettable at this level.”

“After a loss, very often we see fighters that a loss can affect their confidence. Confidence is very important for a fighter, because you can have all the skills in the world, but if you don’t have confidence it’s like someone that has a lot of money in his bank account, but no way of accessing it. So for the magic to happen, you need the skills and the confidence. So we’ll see how mentally strong Kamaru Usman is, and if he comes back and wins the title, I think it will add up to his legacy even more. But it’s going to be a hell of a fight, a hell of a challenge.” Said Georges St-Pierre.

Following on from Edwards’ victory many of his critics took to the idea that what the Brit had achieved was just simply lucky and therefore meant he was undeserving to be the champion.

Knowing in himself what it takes to reach the top of the sport, Georges St-Pierre was quick to downplay these comments and referred to the skill used by Edwards to get Usman into position for the finishing sequence.

“He showcased, in the first round, incredible skills to put Kamaru Usman on his back, mount him, taking his back. He showcased incredible skills right there,” Georges St-Pierre said. “He was losing the second, third and fourth round, and was on his way to losing the fifth round. But I think what makes Leon Edwards so good is his fighting IQ. He is also so good at neutralizing his opponent’s strength. He is very good at shutting down his opponent’s strength and bringing the fight where he is comfortable – to make his opponent fight outside of his comfort zone, and I think that’s why Leon Edwards is so good.”

In what will be an enthralling rematch, Kamaru Usman will have to overcome his greatest test to date and Georges St-Pierre like many is intrigued to see how ‘The Nigerian Nightmare’ will be able to respond to this.

“That’s what makes the beauty of the sport, if you’re on the side of the winner, of course, because everything could happen,” Georges St-Pierre said. “It would be boring if you would always know who would win. Like in any other sport, fighting, football – it’s no different. The best team doesn’t always win the game. It’s the team who plays the best the night of the game that will win. Fighting is the same. It’s not the best fighter that wins the fight. It’s the fighter that fights the best the night of the fight.” (Transcribed by MMAFighting)

Usman will be side-lined until he receives medical clearance following the loss and whilst he is unavailable many fans are hoping to see Edwards make his first title defence against bitter rival Jorge Masvidal in London.

Who do you think will emerge victorious in the rematch?