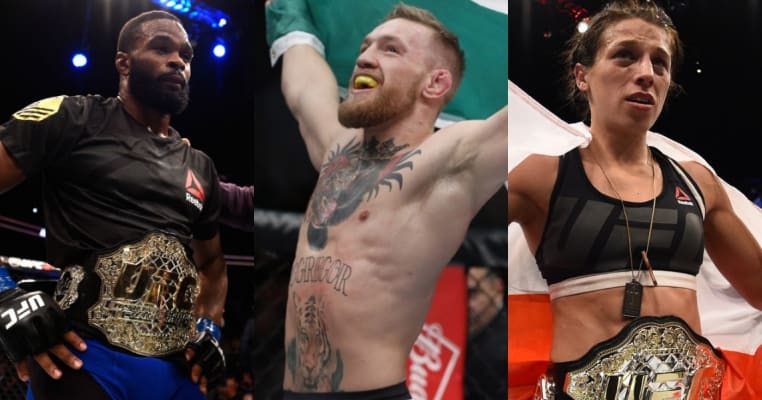 The biggest-ever UFC card went down last night (Nov. 12, 2016) from the famed Madison Square Garden in the form of UFC 205 and the event delivered on all cylinders. With so many pivotal fights taking place, there was bound to be many takeaways from the landmark event.

Let’s take a look at the five biggest:

Many fans criticized the UFC for booking Conor McGregor against Eddie Alvarez for the lightweight title given the fact that the Irishman has yet to defend the 145-pound title he won last December. Many have also criticized the “Notorious” one, claiming that he talked his way into another big fight.

When the cage door closed, however, McGregor proved that he was more than just talk.

After dropping “The Underground King” multiple times in the opening round, McGregor finished the job in the second with a brutal combination. It was a dominant performance from McGregor and he made history in the process, becoming the first man in promotional history to hold two titles at one time.

Now we can only fathom at what his next move may be.

2) A Rematch At Welterweight Is The Only Option

Heading into UFC 205, it appeared as if there were multiple contenders waiting to take on the winner of the co-main event welterweight title bout between Tyron Woodley and Stephen Thompson. Surging contender Demian Maia has been waiting, while former longtime welterweight champion Georges St. Pierre would likely receive an immediate title shot if he does ever return.

But now it’s clear that a rematch between Woodley and Thompson is the only option. After a grueling five round war, the fight was ruled a majority draw and “The Chosen One” walked away with his title. Both men saw success in the bout, and the only way to deem a true winner is to run it back again.

3) Joanna Jedrzejczyk May Have Met Her Match – But Maybe Not

Aside from two somewhat close battles with Claudia Gadelha, Joanna Jedrzejczyk has been utterly dominant throughout her reign as 115-pound champion, and some may even say that her second victory over Gadelha was more decisive.

Last night, however, she may have met her match, or perhaps not, in the form of Karolina Kowalkiewicz. “Joanna Champion” was a huge favorite heading into the bout, and she started off strong, but Kowalkiewicz battled back, and nearly finished the champion in the fourth round. At the end of the day, Jedrzejczyk proved to be too much and retained her title, but she certainly didn’t leave the cage unscathed.

Perhaps a rematch is on the horizon.

4) Yoel Romero Is The No. 1 Contender At Middleweight

The rematch between Rockhold and “Jacare” was recently scrapped, however, meaning the winner of the fight between Weidman and Romero would likely become the next rightful title challenger. Well, “The Solider of God” seized the opportunity, knocking out the New York native Weidman in the third round of their main card scrap.

Romero now owns an incredible eight fight winning streak that includes victories over Souza (albeit a bit controversial) and Weidman. It’s clear that the former Olympian is the No. 1 contender and should fight Michael Bisping next.

Heading into UFC 205, the lightweight division was in a bit of a limbo in terms of who would receive the next title shot after the event’s highly anticipated main event.
The race was seemingly led by top contenders Tony Ferguson and Khabib Nurmagomedov.

Ferguson scored an impressive victory over former champion Rafael dos Anjos last weekend in Mexico City, putting him at the forefront of many title discussions. “The Eagle”, however, returned to action last night, dominating No. 6-ranked Michael Johnson before securing a submission victory in the third round on the preliminary portion of the night’s event.

Both men are deserving of the next shot, but now we must wait to see what McGregor plans to do with his newly acquired title. Of course, a trilogy bout with Nate Diaz could also be a possibility for the 155-pound strap.

The only thing we know for sure is that the lightweight division is even more confusing after UFC 205.