LowKickMMA.com
Home Global MMA Dustin Poirier Says ‘My Next Performance Will Be My Best’ 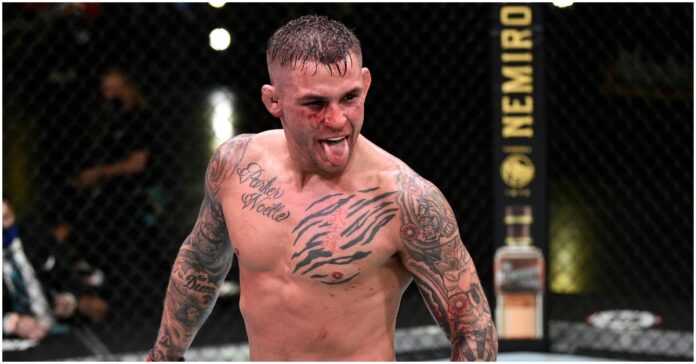 Dustin Poirier has been staying in fight shape since his rumoured short-notice matchup with Nate Diaz back in January fell through.

Although it’s starting to seem more unlikely that the UFC is wanting to make Nate Diaz Vs. Dustin Poirier, ‘The Diamond’ made it clear that whoever steps inside the octagon as his next opponent is in for a tough time.

Poirier uploaded a video to his social media showing off his slick shadowboxing skills captioned:

“My next performance will be my best. Someone is getting clapped.” via Instagram.

Dustin Poirier is looking to bounce back from his defeat to Charles Oliveira at UFC 269 with the ‘The Diamond’ appearing ready for any challenger.

Who is next for Dustin Poirier?

The obvious answer here is Nate Diaz, everyone involved in the fight has openly stated their interest in getting the matchup scheduled however it just simply never came to be.

Let’s look at some other options for Poirier’s next opponent.

Colby Covington stands out, the feud between the pair has seemingly only picked up in recent times. Poirier stated he would never fight Covington inside the cage as he didn’t want him to profit from his success. Whilst that is understandable many fans would love to see this fight take place and I have no doubt the UFC would compensate Poirier very well for this.

Another option is Covington’s UFC 272 opponent Jorge Masvidal. Given the timing, neither of these fights both men would need time to recover and train however the pair would set off fireworks if they ever stepped in the cage to face each other.

It seems Poirier is less interested in continuing to cut to 155lbs however if he did decide to give it one more shot who would say no to him taking on either Michael Chandler or Tony Ferguson. The two men have recently been rumoured for a fight themselves. If not, Chandler will bring the hype in what would be a slugfest between the pair until one drop. Ferguson is a staple of the division despite going through a losing streak and given his accomplishments in the division it only seems right. If this fight were to never happen it would always be a what if.

Who do you think Dustin Poirier should face next?