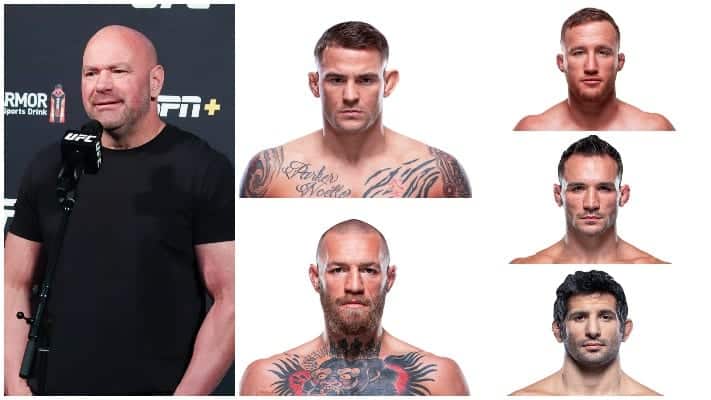 Dana White wants to ensure that the UFC 264 goes on without a hitch.

There’s only one problem: White’s struggling to find the right backup fighter for the main event.

White is gambling that UFC 264 will be the biggest PPV event of the year for the promotion. The first full capacity event in the promotion’s hometown, Las Vegas, the scheduled main event is one of the most anticipated rubber matches in recent MMA history. However, the past year has shown the UFC and the rest of the world anything can happen. Therefore, having a contingency plan is critical.  White recognizes the need, but it has been challenging.

Speaking recently with Bleacher Report, White confirmed that finding a suitable backup has not been an easy task. (H/T MMA Junkie)

“I’m actually looking for someone right now to be the backup on that card,” White said. “Nobody’s jumping out. Nobody’s kicking down my door.”

To better understand White’s difficulty, it’s essential to understand the activity in the lightweight division thus far in 2021. Dustin Poirier (27-6 MMA, 19-5 UFC) and Conor McGregor (22-5 MMA, 10-3 UFC) are ranked one and five in the lightweight division. Many had originally speculated that the rematch would be for the vacated belt after undefeated champion Khabib Nurmagomedov unexpectedly retired.

However, the UFC decided to allow Charles Oliviera and Michael Chandler to compete for the title instead, with Oliveira emerging victorious. Incidentally, the same card saw three of the top six lightweights in action. Both Chandler(#4) and Beneil Dariush (#3) expressed after their fights that they would like time off, hoping to return to the octagon towards the end of the year. Tony Ferguson (#6) suffered a decisive loss that left many wondering if he would retire. So with most of the top of the division tied up, only one name remains a viable option, Justin Gaethje (#2).

With a loss to Poirier and having yet to face McGregor, Gaethje seems like the logical option. However, he has expressed his disappointment with how the UFC has handled him since his loss to Nurmagomedov. Getting an offer to be a backup for the biggest fight of the year is likely not ideal for him at this time.

If both McGregor and Poirier can remain healthy and compete on July 10th, there is no issue. If not, hopefully, one of the top contenders in the division steps up to help White save the card.

Who do you think Dana White should vigorously pursue to be the backup for the UFC 264 main event?