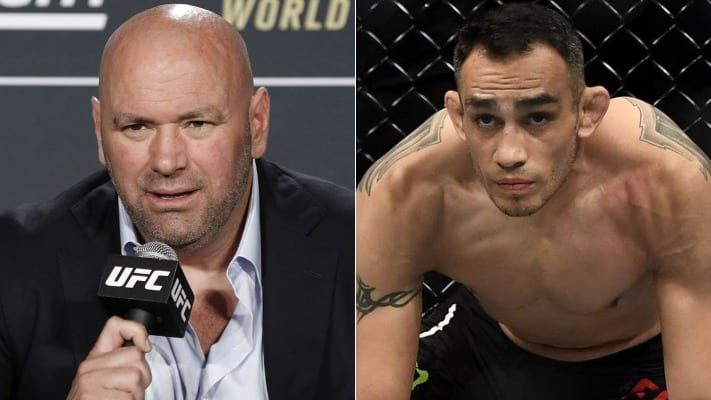 UFC president Dana White believes that Tony Ferguson’s future is unclear after his loss at UFC 256.

Ferguson met Charles Oliveira in the co-main event of last nights card. The fight was seen by many as being a pivotal point in both men’s careers, with Ferguson needing a win to stay in title contention, and Oliveira needing to prove he belonged at the top of the division. In the end, Oliveira dominated for the entirety of the fight, handing Ferguson a second straight loss for the first time in his career. One of the biggest questions after the event was what the future holds for El Cucuy.

White said prior to UFC 256 that he thought Ferguson would bounce back from having his 12-fight winning streak snapped by Justin Gaethje at UFC 249. After that failed to happen, White addressed Ferguson’s future at his post-event media scrum (H/T MMAJunkie).

When asked whether he believed Ferguson was past his prime, White said he wasn’t sure. The former interim lightweight champion turns 37 in February and hasn’t looked very competitive in his last two fights. While some fans are sure to start questioning if Ferguson should hang up the gloves, White isn’t quite there yet.

“Of course that’s possible (he’s past his prime), but Tony needs to go home and spend the holidays with his family and take some time off and think about what he wants to do next year and we’ll see what’s next for him,” White said. “But yes, every time you fight in this business, that’s always possible.”

While this might not be the end of Ferguson’s MMA career, it could be the end of his time in title contention. He was, of course, scheduled to fight Khabib Nurmagomedov an incredible 5 times for the lightweight championship, with the fight falling apart each time. Ultimately, it looks like fans will never get the chance to see one of the most anticipated title fights in UFC history, with Ferguson falling down the rankings and Nurmagomedov retiring from the sport. Despite that, White says the lost opportunity isn’t something he dwells upon.

“No (I don’t worry about it); it just didn’t (happen),” White said. “It wasn’t from lack of trying. We put that fight together five times. It just wasn’t meant to be. I don’t think about it at all.”

Though Ferguson’s future may be unclear, Oliveira’s has never been brighter. He now owns an eight-fight win streak after seeing the scorecards for the first time in exactly six years against Ferguson. He called out the winner of McGregor vs Poirier after the fight, and given the momentum he’s gained in the past three years, it seems unlikely that the UFC will ignore him.

What do you think is next for Tony Ferguson? Should Dana White talk to him about retirement?