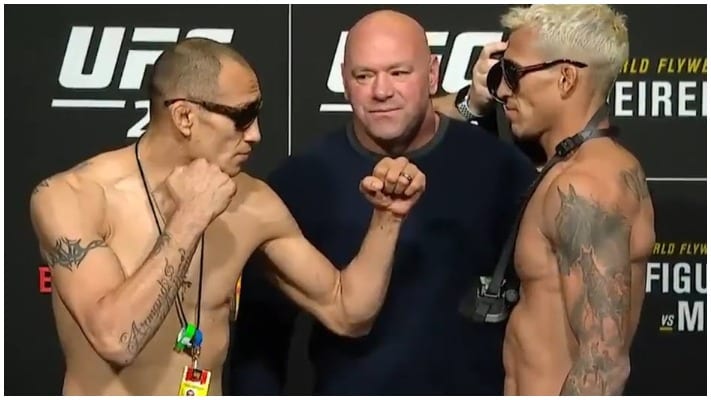 Round 1: Both men start the fight with some low leg kicks. Charles Oliveira lands the best of them. The Brazilian backs up Tony Ferguson who fights well off the fence. ‘Do Bronx’ is getting aggressive early. He presses Ferguson again and manages to complete a takedown. Oliveira is in half guard but it’s something of a stalemate right now. The Brazilian postures up, lands and elbow before advancing to mount. Ferguson is just trying to hang on and avoid taking any damage in this precarious position. Oliveira postures up for a few seconds to land some punches before Ferguson ties him up again. Oliveira gets off some more damage before grabbing the arm bar. He’s got it hyper-extended, Ferguson should tap but he doesn’t – round one ends.

Round 2: Ferguson leaps in with a big hook at the start of round two. It seems like his arm may be seriously hurt. Oliveira secures another takedown and it working for position as he eats a nasty, illegal up kick. We have a brief break in the action before getting back underway. Oliveira has a nasty cut on his eye right now. Ferguson is scrambling for his life but Oliveira is not letting him up. Oliveira has Ferguson stacked up against the fence, he lands a nice knee to the body. ‘El Cucuy’ is in a strange position as he tries to get back up but it’s leaving him wide open to Oliveira’s ground attacks. Ferguson is working for a submission from the bottom but it never really looked likely – round two ends with Oliveira on top.

Round 3: Two kicks and a straight right at the start of the final round from Ferguson. Oliveira is landing some nice low kicks. The Brazilian capitalizes on a scramble to pick up his opponent and slam him to the mat. He’s in side control, continuing his dominance we’ve seen in the previous two rounds. Oliveira jumps into mount. Ferguson tries to explode out and Oliveira switches for the triangle choke – it looks super tight. He eventually lets it go and maintains top control. Ferguson is trying but is finding it impossible to get anything going from the bottom. Ferguson managed to sneak out and get top position for half a second before Oliveira slams him back down to the mat. Oliveira rides out the final round on top – what a performance.