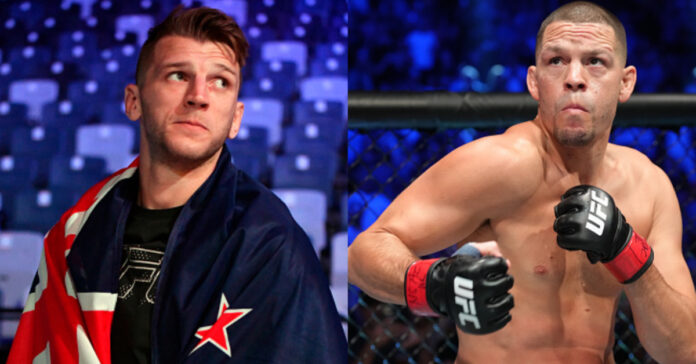 Nate Diaz scored a win in the final fight of his UFC contract after defeating fellow fan favorite Tony Ferguson via fourth-round submission in the UFC 279 main event on Saturday night.

After months of practically begging the UFC to put together his final fight, the promotion finally obliged, though a last-minute change due to a failed weight cut by Khamzat Chimaev shifted plans for the event drastically. Nevertheless, the UFC was able to salvage the card and delivered Nate Diaz his UFC main event, closing the chapter on his 15-year run with the promotion.

With Diaz walking away with a big win and a lot of fanfare, some within the UFC believe that it could set a dangerous precedent for the promotion. No. 14 ranked lightweight contender Dan Hooker recently appeared on The Allstar’s UFC 279 reaction video to discuss Nate Diaz’s exit from the UFC on a high note and the example it could set for other fighters.

“By him fighting out of his contract… leaving on a win, leaving as a huge pay-per-view star — he can test free agency, right?” Hooker said. “And he now has the ability to show other UFC fighters where they stand in the open market, which is incredibly dangerous for the UFC. If he goes out and PFL drops millions of dollars to sign him, or Rizin drops millions of dollars to sign him, or he goes away and fights Floyd Mayweather and gets $10 million; it’s really gonna open a lot of other UFC fighters’ eyes.

“So, I really can see the UFC doubling, tripling, quadrupling whatever contract he was on just so that doesn’t happen, so fighters aren’t as aware of their ability (outside the UFC) — because it’s never been done with a guy like that in Nate Diaz’s position,” Hooker added. “It’s usually when guys are going out on a huge loan, you know what I mean? Or going out on huge losses.” (Transcription via MMA News).

Where Does Nate Diaz Go From Here?

Nate Diaz acknowledged that the UFC tried to work with the ‘Stockton Samurai’ to retain his services, but the two parties were unable to come to an agreement. During his post-fight interview with Joe Rogan, Diaz did leave the door open for a return to the UFC down the line and has expressed interest in completing a trilogy with rival Conor McGregor.

For now, the man from 209 will explore other options and there are sure to be plenty of suitors. The PFL could look to bolster their roster even further after adding both Shane Burgos and Thiago Santos to their ranks. BKFC President Dave Feldman has expressed interest in being in the Nate Diaz business. There is also the possibility that Diaz could find himself entering the squared circle against ‘The Problem Child’ Jake Paul.

No matter where Nate Diaz goes, the ‘Diaz Army’ is sure to be right behind him every step of the way.