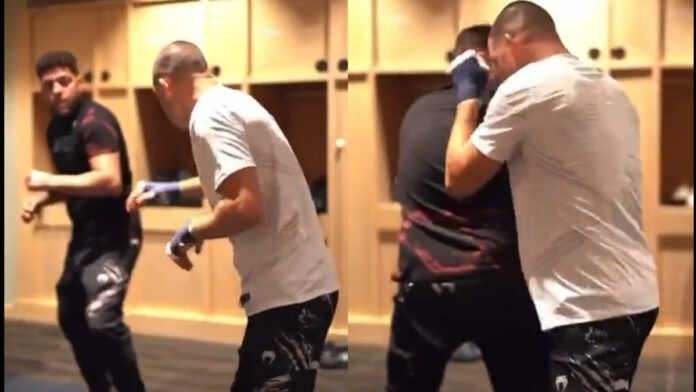 Nate Diaz received some help from his older brother Nick for his fight against Tony Ferguson.

Diaz completed the last outing on his deal with the UFC this past Saturday. He was scheduled to take on the top-ranked welterweight contender Khamzat Chimaev but needed to find a new opponent after Chimaev came in at 178.5 pounds, a massive seven and a half over the welterweight nontitle fight limit of 171 pounds, which Diaz showed up at.

On a single day’s notice, Ferguson stepped up to compete against Diaz in the updated main event of UFC 279. Both grizzled veterans had different opponents on the card and needed to come up with a new game plan to fit their foes. Ferguson is renowned for his unusual style of fighting, often leaving other athletes puzzled about his movement.

Nate Diaz came out on top of a hard-fought contest with Ferguson, securing a guillotine choke submission in round four. The Stockton native went off on a high and reflected on his time in the promotion during the post-fight octagon interview.

“I want to get out of the UFC for a minute and show all these UFC fighters how to take over and own up another sport,” Diaz said (ht Sportskeeda). “How you’re supposed to do it. Conor McGregor didn’t know how to do it and none of these other fighters know how to do it. So I’m going to go out there, I’m going to take over another profession and become the best at that… All you mother f*****s out there trying to run other sports, boxing, kickboxing, jiu-jitsu… If you think you’re the top! Creme de la creme right here, I’m coming for you.”