LowKickMMA.com
Home UFC News Khamzat Chimaev Sends A Shot At Khabib Nurmagomedov: ‘I Ate Too Much... 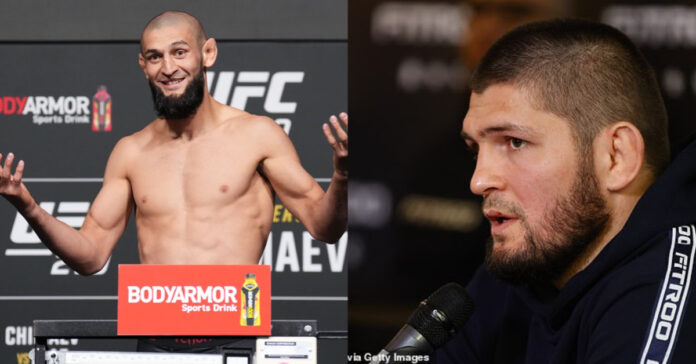 Khamzat Chimaev has been the recipient of some shade thrown at him from Khabib Nurmagomedov, but now he has sent a shot back at him.

Chimaev had an issue at UFC 279 with making weight, as his bout against Nate Diaz had to be cancelled. The UFC was forced to mix a few fights around, but they were able to get the card right in the end. Chimaev came under some heavy scrutiny, as he missed weight by a an entire weight division practically. Khabib Nurmagomedov, who also had his weight issues in the UFC, sent a shot at Chimaev for missing the weight and his lifestyle choices.

“If you are a Muslim, you should have good people around you. Muslims who can say ‘Hey, don’t do this.’ I recently watched the weigh-in of Khamzat Chimaev. I followed what was happening with his weight and looked at his team. There are no Muslims around him and this is very bad. Because if you are a Muslim, you need good, strong people around you that will say ‘Come back, do this.’” Nurmagomedov said about Chimaev at a fundraiser (transcribed by BJPenn.com)

Nurmagomedov is most likely talking about Chimaev’s new training partner, Darren Till.

Khamzat Chimaev didn’t take too kindly to Nurmagomedov’s comments, as he commented on an Instagram post about the situation

‘Borz’ was said to be out late eating and drinking the night before UFC 279, according to the Instagram post. Chimaev commented and took a shot at Nurmagomedov for having to pull out of multiple fights with Tony Ferguson.

“I ate too much tiramisu, that’s why my fight with Tony Ferguson been cancelled five times 🤭😂😂😂😂” Chimaev commented

Nurmagomedov had a ton of issues making weight at lightweight, so him telling Chimaev how he should handle his life, is somewhat “the pot calling the kettle black”.