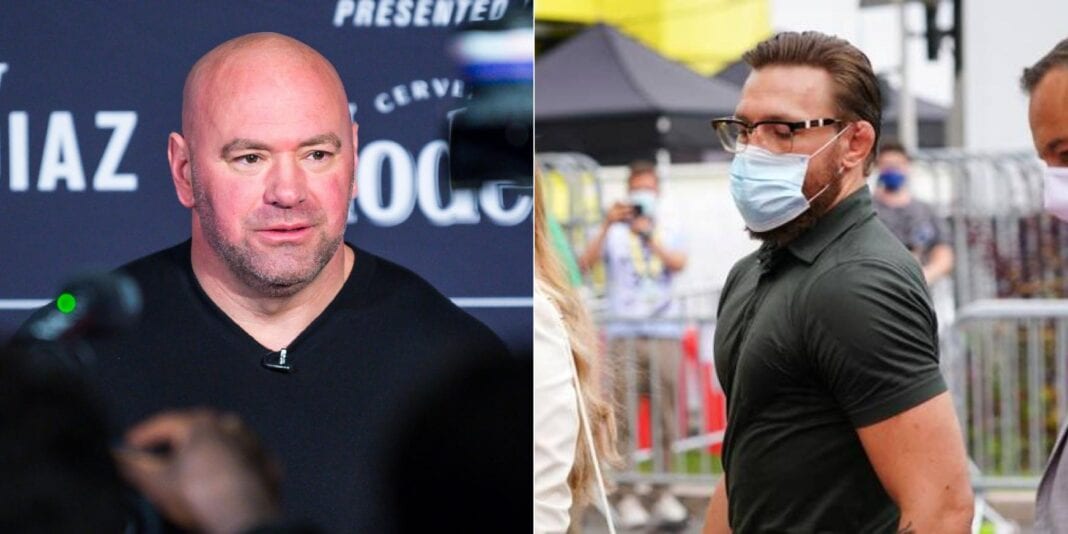 UFC president, Dana White has reacted to the recent attempted sexual assault and indecent exposure allegations brought against the promotion’s former lightweight and featherweight champion, Conor McGregor – during his stay in Corsica.

On Saturday evening, news began to circulate by AFP – regarding allegations brought against the 32-year-old in relation to an incident which occurred on Thursday last, with McGregor subsequently arrested. According to a statement released by the prosecutor’s office, “Following a complaint filed on September 10th. denouncing acts that could be described as attempted sexual assault and sexual exhibition, Mr Conor Anthony Mac Gregor (sic) was the subject of a hearing by the gendarmerie services.“

While no details of the alleged offences brought against McGregor have been disclosed, a representative for the Crumlin native told TMZ, “Conor McGregor vigorously denies any accusations of misconduct. He has been interviewed and released.“

McGregor, who was set to take off on a 180km marathon endurance race promoting awareness surrounding water safety as part of Princess Charlene of Monaco’s team, was forced to withdraw from the event.

Speaking following the culmination of UFC Fight Night Vegas 10 at the post-fight press conference, White was asked about the recent allegations brought against McGregor, reiterating, “I don’t know enough about the situation.“

“Listen, whether you’re retired or not retired, you can get yourself into trouble,” White explained. “I don’t know enough about the Conor (McGregor) situation – I don’t know about it. I know what you’ve read – I’ve read the same things. Conor is retired, I haven’t talked to him, I sure he doesn’t need my help or advice, but if he did he can call. I don’t really know how to answer that question.“

“(Henry) Cejudo’s got a lot left in the gas tank too, he could definitely fight again,” White said. “But I think when you have a guy like Conor and Cejudo who’ve done it for a long time, and cut weight, dieting, all the bullsh*t you go through, and then you make a lot of money – you just don’t feel like doing it anymore. A lot of people don’t think Conor’s really done – I don’t know the answer to that question either, but we’ll see.“

The former two-weight world champion noted plans for a three-fight season this annum, which was subsequently halted amid the ongoing COVID-19 pandemic – with his most recent Octagon appearance coming at UFC 246 in January, in a forty-second knockout over Donald Cerrone in a welterweight curtain-closer.