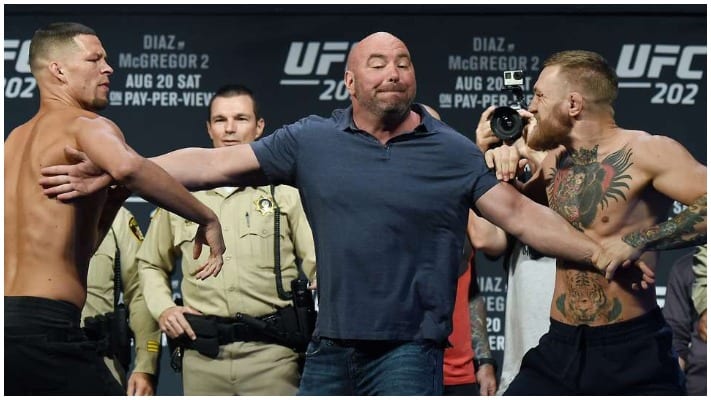 Former dual-weight UFC champion Conor McGregor is still in the USADA testing pool despite retiring earlier this year. The doping agency turned up at McGregor’s yacht earlier today and ‘Notorious’ submitted his sample despite being confused by their appearance.

“What’s going on here @ufc? USADA have just arrived to my yacht this morning for testing? I’ve retired guys! But go on then, I’ll allow them test me,” McGregor wrote. “It’s all natural here baby! Forever and always, God Bless 180km across the Mediterranean Sea tomorrow! LET’S GO!!”

‘Notorious’ then followed this up with another tweet that took aim at Nate Diaz. The Irishman labeled his long-time rival a drug cheat in his very next post.

This is the second time in a week McGregor has fired shots at one or both Diaz brothers. On Tuesday Ariel Helwani of ESPN broke news that Nick Diaz is set to return to fighting in 2021. The veteran MMA reporter spoke with Diaz’s manager, Kevin Mubenga who confirmed his fighter was planning a comeback in 2021 and had successfully cut to somewhere between 175-165lbs. McGregor was quick to respond to the news and replied “line them up” when BT Sport posted a picture of the Diaz brothers to social media.

The former featherweight and lightweight champ hasn’t fought since earlier this year. McGregor wiped out Donald ‘Cowboy’ Cerrone in 40 seconds at UFC 246 back in January. He has since retired from the sport after becoming frustrated by the lack of fights available to him.

Diaz hasn’t fought since suffering a third round TKO defeat at the hands of Jorge Masvidal who claim the inaugural BMF title when the doctor stopped their UFC 244 main event due to a cut. The pair are expected to rematch early next year but it appears McGregor still has some interest in completing his trilogy with Diaz despite being retired from fighting.

Do you think Conor McGregor will return to fighting in 2021?