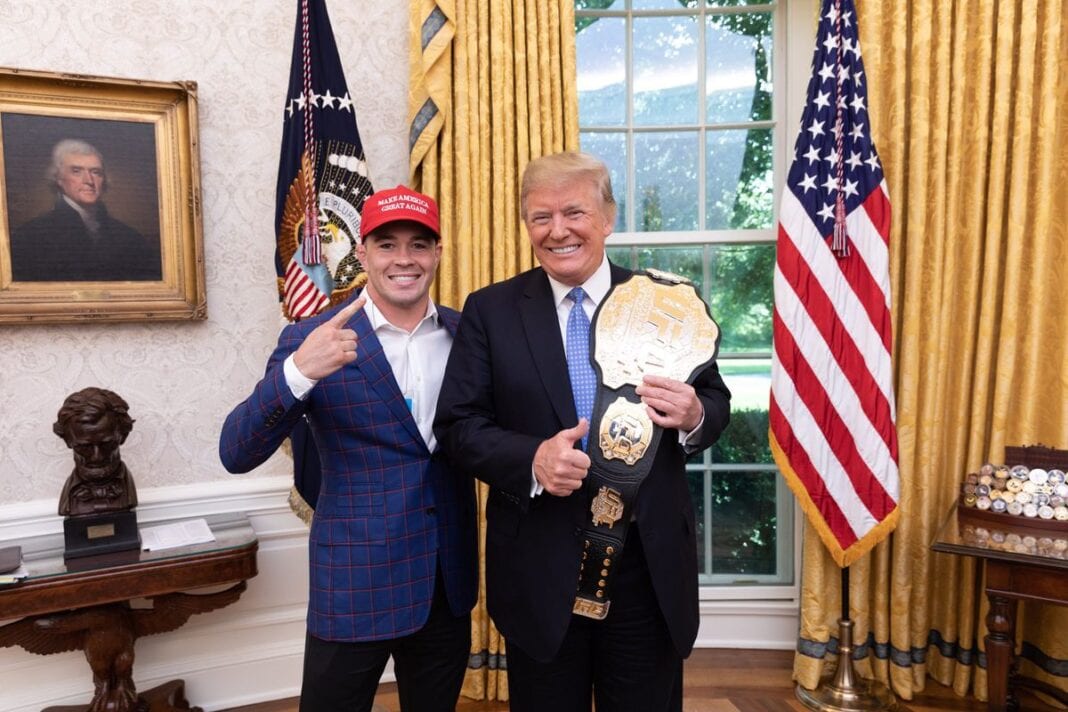 The outspoken Covington returned to the win column at UFC Fight Night Vegas 11 earlier this month – scoring a fifth-round stoppage win over former American Top Team teammate and former division kingpin, Tyron ‘The Chosen One’ Woodley. During his post-fight interview with ESPN – the Clovis native received a phone call from president, Trump who congratulated him on his stoppage of Woodley, explaining how he had rushed home to catch the main event clash.

Sporting a ‘Keep America Great’ baseball cap, Covington sat in the crowd at the first of three debates between Trump and Biden, from the Sheila and Eric Samson Pavilion at Case Western Reverse University, in Cleveland, Ohio.

During the live broadcast, Covington appeared on-screen – shaking hands with surrounding supporters, and after the culmination of the debate, moderated by television anchor and journalist, Chris Wallace – could be heard declaring Trump as the greatest president in the history of America.

Following the capturing of the interim welterweight crown opposite former lightweight gold holder, Rafael dos Anjos back UFC 225 in June of 2018 – Covington visited The White House with his interim crown upon invitation by president, Trump.

Calling for a championship rematch opposite current kingpin, Kamaru Usman who headlines UFC 246 on December 12 opposite number-one contender, Gilbert Burns – the Californian then explained how he’d take a pairing with another former training partner, BMF championship holder, Jorge Masvidal at the very least.

The above noted White then claimed that it’s “very possible” the promotion look to ink that fight next, rather than a BMF title rematch between Masvidal, and Stockton fan-favourite, Nate Diaz.