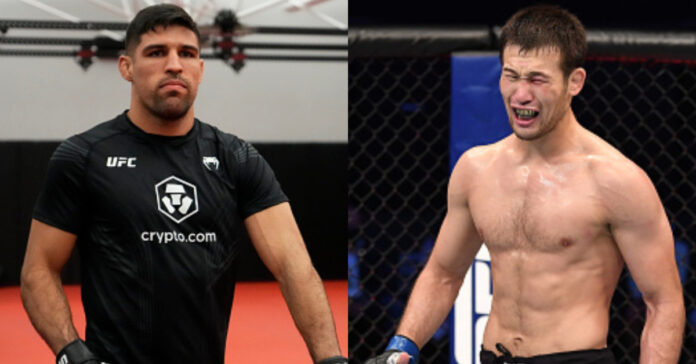 The UFC’s No. 6 ranked welterweight Vicente Luque recently spoke to Mike Owens with LowKick MMA to discuss all things MMA. Eventually, the conversation turned to rising contender Shavkat Rakhmonov who trains with ‘The Silent Assasin.’ Luque was asked about his observations while training with the Kazakhstani fighter.

“He’s really good. I’ve trained with him. I’ve mostly grappled with him, but I’ve seen him sparring a lot. I sparred him a few rounds, but we were always in different moments. Like, I was not in training camp and he was right at the last weeks of training camp so he wasn’t going with everybody. Mostly with guys that had the style of his opponent, but I got to grapple with him and he’s a beast in grappling and he’s super technical striking. I’ve watched him on the pads with Henry Hooft and yeah, he’s a beast. He definitely is a beast, you know.”

Vicente Luque addressed the possibility of facing Shavkat Rakhmonov down the line and if that would be awkward considering the two train together at Kill Cliff FC, formerly known as Sanford MMA in Deerfield Beach, Florida.

“I mean, that happens all the time. That’s something that we can’t avoid as fighters. We know that eventually, we’re going to have to fight each other. It’s something that, in a way, doesn’t bother me. I don’t mind training with guys that I’m gonna fight. Obviously not for that specific training camp, but in other moments, for me it is what it is. We’re not gonna get much from training against each other.”

Vicente Luque Believes Fighting Those You Train With is Inevitable

“The biggest fight I want is against Kamaru Usman and I’ve trained years with him. We know a lot about each other from training, but it’s totally different when it’s fight night. So yeah, I think one day it could happen and if it does, it is what it is. That’s how Sanford [MMA] is right now. So much talent. So many good guys. We could be seeing guys like Logan [Storley] and Jason Jackson for example fighting for that Bellator title. It’s how it works.”

The last time we saw Vicente Luque in the Octagon, his four-fight win streak was snapped in a unanimous decision loss to Belal Muhammad.

Debuting for the promotion at UFC 254 in October 2020, Shavkat Rakhmonov has been nothing short of spectacular. In four appearances, ‘Nomad’ has four straight wins, all coming by way of finish. Yet to see the third round in his UFC career, Rakhmonov has three victories via submission and one by knockout. His biggest win yet came against Neil Magny at a UFC Fight Night in June.

The win over Magny thrust Rakhmonov into the top ten rankings. With Vicente Luque sitting in the No. 6 spot, it’s quite possible that the two could meet each other inside the Octagon at some point. While Rakhmonov is hot off the heels of the biggest win of his career, Luque is preparing to get back into the win column against Geoff Neal on August 6th.

‘Handz of Steel’ will look to break into the top ten with a big win over Luque while ‘The Silent Assassin’ hopes to score another win on his way to a shot against reigning champion Kamaru Usman. Assuming ‘The Nigerian Nightmare’ gets past his next test in Leon Edwards at UFC 278.