Two rather high-profile welterweight and strawweight pairings are set for the UFC’s upcoming schedule of fights in the month of October.

Firstly, a matchup between the surging Chicago wrestling staple, Bella Muhammad, and the promotional-perfect Roufusport mainstay, Sean Brady has been added to a UFC 281 pay-per-view event on October 22. from the Etihad Arena in Abu Dhabi, UAE. ESPN MMA reporter, Brett Okamoto was first to report the news of Muhammad’s return against Brady in October.

The UFC books a high-stakes strawweight headliner to main event an October 1. event

As for the beginning of the month, a high-stakes, potential strawweight title-eliminator between Brazilian Jiu-Jitsu ace, Mackenzie Dern, and the Liaoning native, Yan Xiaonan is scheduled to headline a UFC Fight Night event on October 1. to kick off the month’s proceedings for the organization.

“It’s official. Mackenzie Dern and Yan Xiaonan will meet in a strawweight main event on October 1.”

Enjoying an impressive three-fight winning run, Muhammad headlined UFC Vegas 51 back in April, earning the #5 rank in the official welterweight pile with a rematch, unanimous decision win over Vicente Luque.

In a pair of prior victories against former title challengers prior to avenging his win against Luque, Muhammad handed one-sided unanimous decision losses to both Stephen Thompson, and Demian Maia.

As for Brady, the #9 ranked Philadelphia native boasts a 15-0 professional record, most recently besting Michael Chiesa with a unanimous decision triumph at UFC Vegas 43 last time out.

Calling for an interim title fight recently at the strawweight limit, Dern returned to winning ways after a loss to Marina Rodriguez, defeating division staple, Tecia Torres with a split judging success at UFC 273 back in April.

For Xioanan, the Chinese contender is tasked with rebounding from a recent pair of losses to the aforenoted common-foe, Rodriguez, as well as a ground strikes knockout defeat to inaugural strawweight champion and current division titleholder, Carla Esparza. 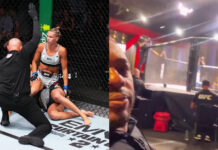