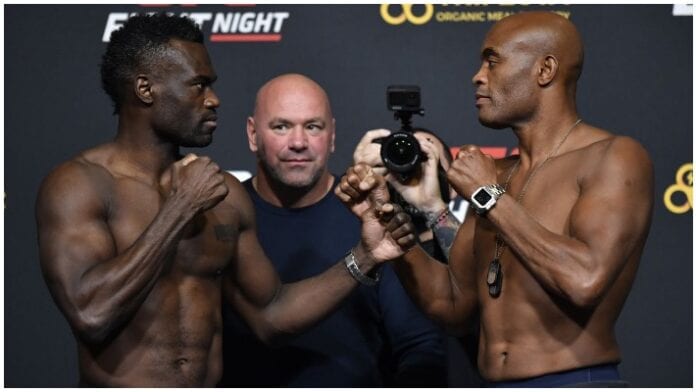 IT’S TIME! The UFC Vegas 12 main event is finally upon us. Uriah Hall puts place in the middleweight top ten on the line when he squares off against MMA legend, Anderson Silva in what could be the final fight in the career of ‘The Spider”’. Who’ll win? Let’s find out…

Round 1: It’s a feeling out process in the first minute of this fight. Uriah Hall is edging forward as Anderson Silva moves around the octagon. About 90 seconds in and both men exchange leg kicks in the first bit of action. Silva tries a kick upstairs but Hall sees it coming and gets his hands up to block it. ‘Prime Time’ tries a high kick of his own but slips. Silva catches him on the way up with a nice left hand. ‘The Spider‘ is starting to let his hands go. He’s swarming on Hall now and the TUF runner-up doesn’t like it. Hall manages to land a one-two that just puts an end to the relentless attacks from Silva. The former middleweight king lands a beautiful spinning heel kick to the calf of his opponent. Hall puts together a couple of punches, he needs more of it. Silva storms forward with a three punch combo, looks like two of them landed just before the horn sounds to end round one.

Round 2: Once again not a lot is happening at the start of this round. Both men are burning lot’s of energy, moving a fair deal too but nothing significant has been thrown or landed. Two minutes in now and Hall and Silva begin to trade kicks. Just as the fight looks to be building momentum we have a stoppage due to loose tape on the glove of Hall. We are back underway, Silva begins advancing forward in the quirky way we’ve seem him do so throughout his Hall of Fame career. ‘The Spider’ lands a couple of low kicks. Hall just about lands with a jab. This has been a really dull second stanza. Hall spins for a kick which somewhat lands on the chest of Silva. Both men exchange powerful jabs for the most significant shots of the five minutes before the round ends.

Round 3: Silva lands an unorthodox punch to the body at the start of the third round. He goes high with the kick but misses. Hall pops out the jab but doesn’t follow up with anything. The 36-year-old almost sneaks a kick of his own upstairs. A lot of hand fighting, not a lot of actual fighting. Hall lands another jab. Silva lands low with the kick, Hall spins and misses. They are getting a little loose now. Silva tries an axe kick a follow up with an overhand. The Brazilian is starting to gain some momentum now. Silva lands a punch and Hall seems to signal for an eye poke – Herb Dean waves away his protests. Silva lands on the way in then clinches against the fence. He’s stomping down on his opponents foot – that looks painful. As round three draws to a close both men thrown down and Hall gets the better of it. A right over the top drops Silva. Hall is swarming on the floor looking for the finish but the bell saves ‘The Spider’ who was hanging on.

Round 4: Silva seems fine at the start of round four. He again tries for another head kick which doesn’t quite come off. ‘The Spider’ comes flying in with wild punches but he gets dropped again on his way in. Hall has plenty of time to work his ground strikes this time and gets the finish.