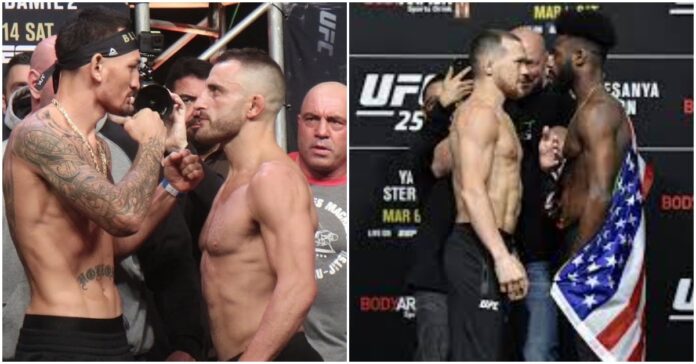 UFC 272 will headline two of the sports biggest championship rivalries in the sport as Alexander Volkanovski will defend his title once again against Max Holloway. Aljamain Sterling will also defend his championship for the first time against interim champion Petr Yan.

The fights were first reported by Brett Okamoto at ESPN.

The trilogy fight between Max Holloway and Alexander Volkanovski has major implications on both the division and Holloway’s featherweight legacy. If Holloway loses a third straight time to Volkanovski, a move to lightweight may be in the cards for Holloway. If Holloway wins this fight, we may be looking at a fourth fight between the two in the future.

The last time the two fighters met was at UFC 251 where Volkanovski defended his title for the first time since taking it from Holloway. Volkanovski narrowly beat Holloway by split decision in a razor close fight. Since that fight, Holloway has won two straight against Yair Rodriguez and Calvin Kattar. ‘Blessed’ won both of those fights via unanimous decision and put on a show in both of those fights.

Volkanovski defended his title once in 2021 against Brian Ortega in a fight he dominated almost every minute of. Needless to say, Volkanovski won that fight via unanimous decision.

Sterling won in their first fight via disqualification due to an illegal knee from Yan. Sterling hasn’t fought since then due to injuries he sustained to his neck that required surgery. The two were supposed to meet at UFC 267, but Sterling had to pull out due to the fact that he wasn’t fully healed from the surgery.

Corey Sandhagen stepped in for Sterling in an interim title fight against Yan. Yan bested Sandhagen via unanimous decision and looks to regain his title at UFC 272. Sterling is looking to stun a lot of naysayers that believe he doesn’t deserve the title, while Yan is looking to back up his trash talk and defeat his rival.

Are you excited for these two rematches?