LowKickMMA.com
Home UFC News Tony Ferguson “Would Love To Be Able To Fight Dustin Poirier” In... 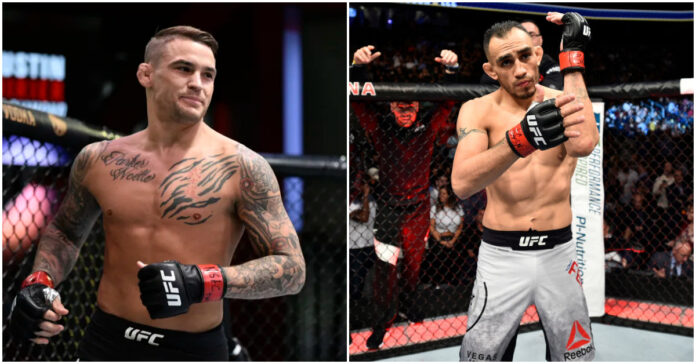 Former interim UFC lightweight champion Tony Ferguson is eyeing a matchup with Dustin Poirier in his next fight.

Coming off the first-ever knockout loss of his career, Tony Ferguson has now dropped four consecutive bouts including another TKO defeat to Justin Gaethje. Although he has dropped down to the ninth-ranked contender spot in the official lightweight rankings ‘El Cucuy‘ remains one of the most endeared fan favorites.

Ahead of his latest outing against Michael Chandler at UFC 274, Ferguson made some inflammatory comments about the UFC and its president Dana White. Despite the ongoing tensions during the build-up, White assured the media that Ferguson will go into the bout secure about his future in the promotion regardless of the outcome.

In a recent interview with MMA Junkie, Tony Ferguson talked about what he has planned for the future. Reeling from a Knockout of the Year contender loss like that can’t be easy but props to Ferguson who’s already found a potential opponent for his next fight.

“I would love to be able to fight Dustin Poirier,” Ferguson said. “Obviously he likes to go stand-up. A stand-up battle wouldn’t be bad. When I’m ready to fight I will let the UFC know. I guarantee you they’ll let me know, too, ‘Hey, this is who we have.’ I was ready for (Islam) Makhachev in Abu Dhabi if some things would’ve been a little bit different. But I try to take these opportunities and present them so I’m there for the company. They know I’m a company man, and that’s why they said I’m not going anywhere.” (h/t MMA Mania)

Dustin Poirier has remained out of action since his most recent showing against Charles Oliveira last December. Although ‘The Diamond’ lost the fight, he still carries momentum ahead having won eight of his last ten. The 33-year-old Louisiana native was seemingly targeting Nate Diaz for a bout next but it seems unlikely given the lack of interest from the UFC.

Would you like to see a fight between Ferguson and Poirier?