In spite of Askren’s wide-ranging success in combat sports, including a pair of NCAA wrestling championships and MMA title reigns in Bellator and ONE Championship, Malignaggi doesn’t think he’s a fighter for Paul to be concerned about.

“His striking was, from what I’ve seen, some of the most pitiful in combat sports,” Malignaggi said during his recent appearance on “The Schmozone” podcast. “Personally, me, anytime you get knocked out in less than five seconds in any fight, you lose the ability to call yourself a fighter ever again.”

Askren’s rise to stardom in the UFC was halted when he was knocked out with a flying knee by Jorge Masvidal at UFC 239 just two years ago. Following the Masvidal fight, Askren suffered a submission loss to Demian Maia before announcing his retirement from MMA.

This isn’t the first time that Askren and Malignaggi have went at it in the media. After Malignaggi’s decision loss to Artem Lobov in a Bare Knuckle Fighting bout in 2019, Askren criticized the former Boxing world champ; saying “people who box must just not be that good at boxing.”

Askren has recently worked with legendary boxing coach Freddie Roach in Los Angeles to prepare for the upcoming fight, along with teasing his sparring sessions on social media. Paul has been putting in work too, including training sessions with Masvidal and UFC veteran Mike Perry.

Askren will have the opportunity to silence Malignaggi when he takes on Paul in his professional boxing debut on April 17th at Mercedes-Benz Stadium in Atlanta.

What do you think of Paulie Malignaggi’s comments heading into the Ben Askren/Jake Paul Boxing Match? What are your predictions for the fight? 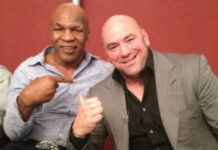