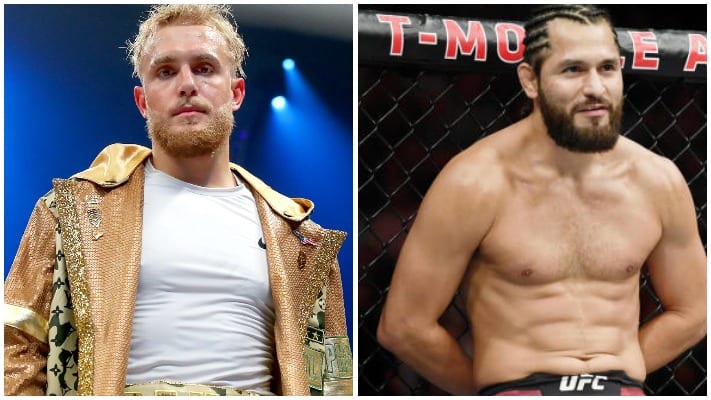 The 24-year-old is scheduled to box Ben Askren on April 17. A man Masvidal famously knocked out with a flying knee in five seconds at UFC 239.

In an interview with MMA Junkie, Paul revealed what tips ‘Gamebred’ has been giving him ahead of his fight with the former Bellator and ONE Championship titleholder.

“(Masvidal) said, ‘Look, Ben is going to try to hang onto you and wrestle you and clinch you and try to wear you out,’” Paul said. “We were just working on clinch drills and fighting on the inside, and he was trying to show me how to knock out Ben faster than he did. So, we’ll see what happens. I might go running at Ben right in the first two seconds to try to break (Masvidal’s record). But Masvidal is great. He’s very supporting. He’s always been my homie and supported me, and that goes both ways. I’m excited to see if I can knock out Ben faster than Masvidal.”

On the night Paul is expecting to quickly dispatch of Askren.

“I’m expecting a quick knockout,” Paul said. “I don’t see him making it out of the first round. I know he’s tough. I know he’s going to work hard. He can get whoever he wants to train him. People forget that Floyd Mayweather was calling Nate Robinson almost every day to give him tips and advice on boxing, and guess what? Floyd’s not getting in the ring. Freddie Roach is not getting in the ring for Ben. Tyron Woodley isn’t getting in the ring for Ben, and by the way if he did, I would beat the sh*t out of Tyron Woodley. It’s a loser training another loser. He can get whoever he wants. It’s still going to be a quick night. He can train as hard as he wants. It doesn’t matter. My athleticism, my speed, my power, my accuracy is too much for these guys to handle.”

The internet celebrity insists his bold prediction is not out of cockiness or a disregard for Askren’s ability, rather great confidence in his own boxing skills.

“This guy is 19-2 (in MMA), he has less losses than (Conor) McGregor, he’s a two-time NCAA Division wrestling champion, he’s an Olympic athlete,” Paul said of Askren. “I wanted to challenge myself. I know this is a serious opponent. It’s going to be a movie. Eventually I want to fight Conor McGregor – I want to show the MMA world, ‘Be careful before you come over here and try to box us.’ You saw what Floyd did to McGregor. You’re going to see what I do to Askren.”

Do you think Jake Paul will beat Ben Askren on April 17?