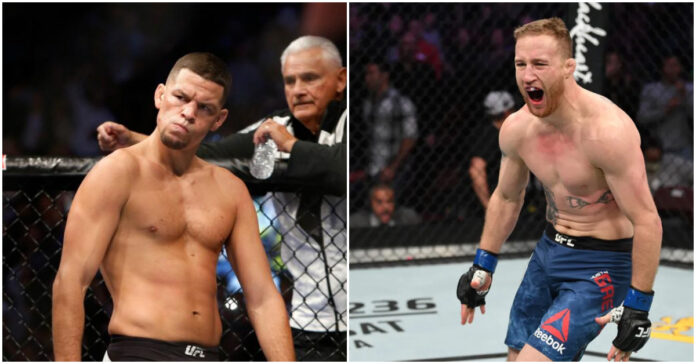 UFC welterweight Nate Diaz has bashed Justin Gaethje for his recent comments regarding his loss to Khabib Nurmagomedov.

Nate Diaz is not particularly known for mincing his words as he went in on Justin Gaethje. ‘Highlight’ is set to face the reigning UFC lightweight champion Charles Oliveira this May 7 at UFC 274. As a former title challenger, Gaethje fought the legendary Khabib Nurmagomedov in his retirement fight in October 2020.

Ahead of his upcoming fight this weekend, Gaethje spoke to Megan Olivi for ESPN about how Oliveira will be hoping to take the fight to the ground.

“(Oliveira) is gonna have to walk through hell like Khabib did,” Gaethje said. “He better be praying every day that he gets me to the ground.”

Although the judges scored the first round for Gaethje (making him only the second fighter to ever win a round against the Dagestani), Nurmagomedov won the contest in convincing fashion as he submitted Gaethje in the second round.

Taking to his Instagram story after seeing the quote pop up on his social media feed, Diaz criticized the 33-year-old fighter’s take on his own performance.

“Bruh got triangle choked from mount. What he talkin bout.”

Fan-favorite Nate Diaz has become one of the most recognizable names in the sport. Walking in the footsteps of his elder brother Nate, the younger Diaz charmed the fans with his bold personality. As one of the biggest draws of MMA, Diaz finds himself struggling to book the last fight on his contract.

“@ufc I been trying to fight everybody and no go what’s the hold up? I’m not fighting Conor he sucks. I’ll fight some one quit slow rolling me please. Thanks”

There were talks of a potential fight with Dustin Poirier as the two went back and forth online seemingly willing to make it happen but interest from the UFC died down shortly after.

Diaz has fought sporadically over the last five to six years. His last outing resulted in an unsuccessful effort against Leon Edwards in September 2021. Given that Diaz only has one fight left on his current deal, it’s likely that the UFC is saving him for a third fight with Conor McGregor.

Would you like to see Nate Diaz complete his deal or wait to fight Conor McGregor?