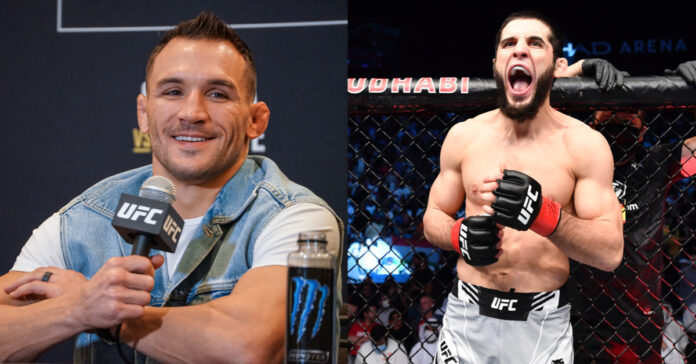 Michael Chandler has criticized fans and media who have lumped praise onto Islam Makhachev as he prepares to take on Charles Oliveira at UFC 280.

Chandler was able to come out on top early into the second round with a highlight reel front kick knockout after being dropped by ‘El Cucuy’ in round one.

One of his previous dance partners, Charles Oliveira also last competed on the same card as he was booked to defend his 155lbs division belt against fan favorite Justin Gaethje (23-4 MMA). Thus before weighing in over the championship limit which resulted in ‘Do Bronx’ being stripped of his world title.

However, the 32-year-old walked through the fire and still handed in the best performance of the night.

Chandler who has fought Oliveira before understands more than most about what sort of challenge that can be and has continued to question if Makhachev is that man to dethrone the ‘Champ’.

Speaking to ‘MMAFighting’, Michael Chandler chose to further dissect Islam Makhachev’s record as he began to question whom the Dagestani native has won against and whether it really warrants the opinion that Islam Makhachev is prepared and ready to beat Charles Oliveira.

‘Nothing against Islam, you say he looks great, you say he looks unbeatable at times, but he hasn’t really fought anybody. That’s really the truth, He beat No. 14 and then beat Dan Hooker, who has been on a three or four-fight losing streak.‘

‘Now people will say, ‘well, one of your wins was against Dan Hooker, what are you talking about?’ Chandler exclaimed.

‘I fought Dan Hooker at the same time. He had just gone 25 minutes with Dustin Poirier, who at the time was the No. 2 Lightweight on the entire planet.‘

Despite the criticism, Michael Chandler has already admitted that he would give Islam his flowers if he was able to shock the world and beat Oliveira at UFC 280, although, he can’t bring himself to do that just yet.

“I’m not saying that [Islam] not that good,” Chandler said. “We just can’t say that he’s that good yet. It’s premature praise.”

Do you think Michael Chandler has a point, or will Islam Makhachev shock the world?