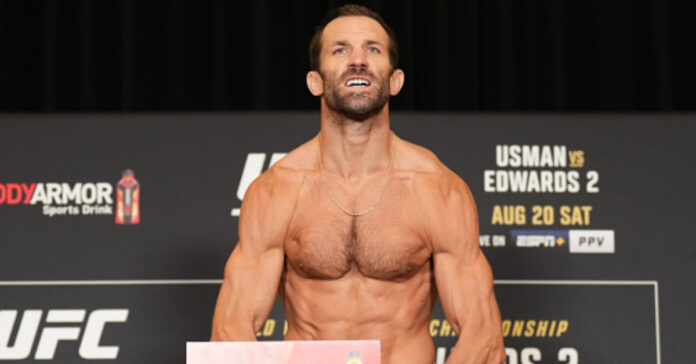 Former UFC middleweight champion Luke Rockhold was fired up at the official UFC weigh-in ahead of his highly anticipated return against Paulo Costa at UFC 278 on Saturday night.

Rockhold (16-5-0) has been chippy with the media all week leading up to his return after nearly three years on the shelf. Aside from the war of words with his UFC 278 opponent, Rockhold has taken aim at the UFC’s treatment of fighters, the Nelk Boys, and a media member for Full Send Entertainment. Nobody has been safe from Luke Rockhold‘s new tell-it-like-it-is persona including those at this morning’s official weigh-ins.

Rockhold successfully made weight by stepping onto the scale with his dog in tow and his watch still in his possession. Once his weight was announced, the former champion immediately stepped off until being prompted by a photographer to step back on the scale for a photo op. “What you want?!” Rockhold shouted back before obliging, stepping on the scale long enough to take his picture. Rockhold exited the state with the parting words, “f*cking let’s go!”

Ready to jump back into the thick of it against No. 6 ranked middleweight Paulo Costa, Luke Rockhold has been slinging truth bombs in the days leading up to his return. It all appeared to start during his appearance on ‘The MMA Hour‘ with Ariel Helwani. Discussing why he walked away from the UFC for so long, the former champion explained how the environment turned him “sour.”

“After losing the title, you get disrespected,” Rockhold said. “This is a mafia. You know how it is in the UFC. Dana ripped you (Ariel) from my seat that night and ripped you out of the UFC for doing your job. And there’s no rhyme or reason in this game and when you lose your leverage, these people try to step on you. And then you fight back. It’s a constant fight. It’s annoying. It’s f*cking sick. It’s disgusting and it needs to change.”

“Incorporating Full Send into the UFC is just the dumbest thing ever. I see these guys around here, I’m like, ‘Why the f*ck are these degenerate kids a part of our f*cking company? Why is Dana White… ‘cause he’s trying to buy into popular culture? Popular culture is going down the drain, it’s bringing the whole world down the drain, and people just need to wake up.”

Luke Rockhold’s wrath didn’t stop there when the returning middleweight took aim at a Full Send media member for giving a Mexican luchador mask to Marlon ‘Chito’ Vera who is Ecuadorian.

“I see all you guys around here right now, and I see this motherf*cker right here. You need to do your f*cking homework. This f*cking degenerate culture of Barstool Sports and Full Send, you gotta do your homework. You can’t approach ‘Chito’ and give him a f*cking Mexican mask and about his culture. His culture? He’s f*cking Ecuadorian motherf*cker. Do your homework,” Rockhold said.