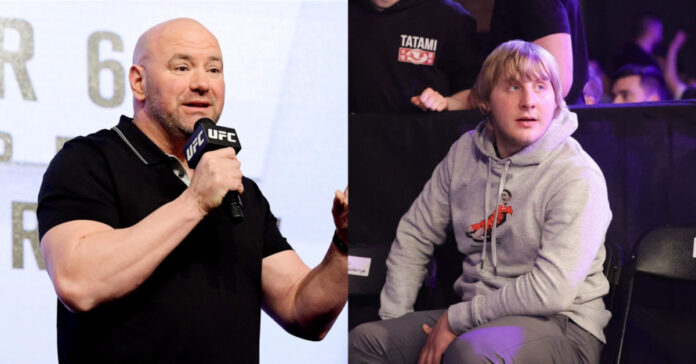 Paddy Pimblett’s weight gains have now become a running joke within the MMA sphere but, the Scouser’s eating habits have also drawn a lot of criticism.

‘The Baddy’ face becomes almost comically bloated during his time spent out of camp and recently admitted that he was around 200lbs, just a few weeks on from his lightweight bout.

This time it was his boss, Dana White, who would warn Pimblett of the harm that he could be causing his body in the long term. He would also admit that it makes the matchmaker’s jobs more difficult with him being so far off his fight weight.

“It makes it tough for us when we are in the matchmaking room and we want to throw together a fight,” White said. “Maybe we can throw him in a card in a month or a month a half, but it hurts us too as we have to be very specific when we plan fights for him because he is nowhere near close to the weight. What you don’t want to do is put all that pressure on him to cut that much weight in that short amount of time.“

“It’s not good for you, we all know that. We know that fluctuating and cutting all that weight is very bad, it definitely doesn’t prolong your career. It’s tough on your body and your organs.”

Although White warns Pimblett of his eating habits, he also admits that Pimblett is his own man and that whatever he decides to do is his own decision.