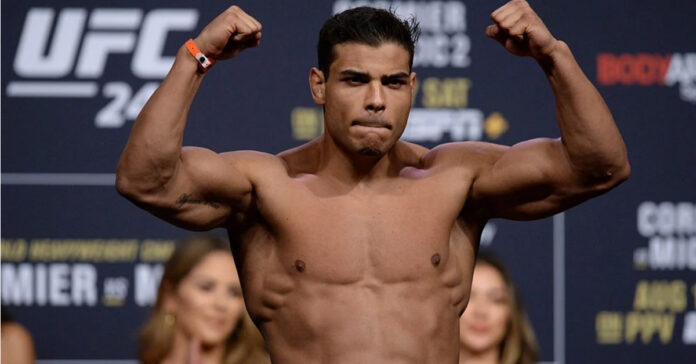 Paulo Costa was not happy with the United States Anti-Doping Agency.

The former title challenger is gearing up to face former middleweight champion, Luke Rockhold, in the co-main event of UFC 278. Rockhold will mark his return to competition after a three-year hiatus. He chose to step away from the sport after dropping two in a row by knockout. Ahead of their bout, Costa expressed his frustrations about the arduous process that begins before getting inside the cage.

During the official Friday weigh-ins for UFC 278, Costa stepped on the scales to hit the mark at 185.5 lb, which makes him eligible for the division matchup given the one-pound allowance for non-title fights. Having missed weight by a mile previously, it was a sign of relief for Rockhold, UFC, and the fans to know that “Borrachinha” made the limit successfully.

Costa took the chance to fire shots at USADA for an early morning drug test they conducted on the Brazilian. Following the incident, Costa uploaded a clip on Twitter, writing, “F*ck the the boss on Usada who sent their agents this morning at my sleep room 6 am to take my blood out!!! I was cutting weight very dehydrated and they wants took my blood ! F*ck those guys!!! I never been caught by usada test I don’t need this f*ck shit.”

Paulo Costa will be looking to get back to winning ways, much like his opponent. He racked up a 13-fight win streak, finishing 12 and knocking out 11 opponents. His accolades earned him the nickname the “Eraser.” However, Costa has not been able to find the same form in his previous two outings. He suffered the first defeat of his career at the hands of the current middleweight champion Israel Adesanya and lost to Vettori in his most recent showing.

Who do you have for the upcoming matchup, Paulo Costa or Luke Rockhold?