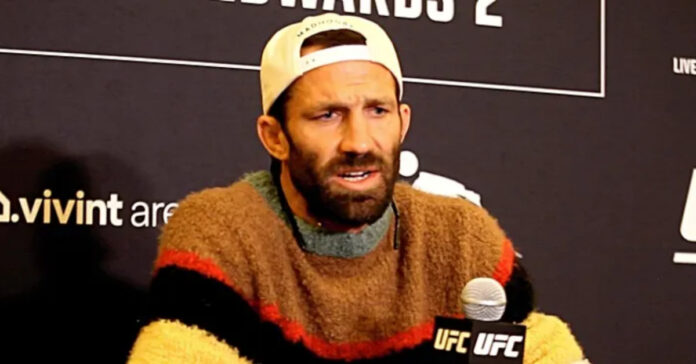 Ahead of his first Octagon appearance in over three years, former UFC middleweight champion, Luke Rockhold has jumped to the defense of recent UFC San Diego headliner and teammate, Marlon Vera and his culture, tearing into a Full Send reporter – urging him to do his “homework”.

Rockhold, a former middleweight champion under the UFC and Strikeforce banner, most recently featured on the main card of UFC 238, suffering an eventual second round knockout loss to Jan Blachowicz in his light heavyweight division bow.

Returning this weekend in the co-main event of UFC 278, Luke Rockhold features against Brazilian powerhouse and one-time title chaser, Paulo Costa in a pivotal clash in his Octagon return and middleweight rebirth.

Approaching his return to active competition with a large sizeable chip on his shoulder regarding the UFC’s practices and fighter pay, Rockhold pointed out a Full Send reporter during his media availability, criticizing his platform for encouraging a “degenerate” culture, and urging him to do his culture after he gifted Ecuadorian finisher, Vera, a Mexican lucha libre mask post-UFC San Diego.

“I see all you all you guys around here now, and I see this motherf*cker right here,” Luke Rockhold said when pointing to a Full Send reporter. “You gotta do your f*cking homework, you f*cking – you know, this degenerate culture of f*cking Barstool Sports and Full Send. You gotta do your homework. You can’t approach ‘Chito’ (Marlon Vera) and give him a f*cking Mexican mask about his culture. His culture? He’s f*cking Ecuadorian, motherf*cker. Do your homework.”

“You gave him a Mexican mask and said, ‘This is your culture.’” Luke Rockhold continued. “You said something along those lines and it was a disrespect to him. And where he’s from. It’s about – being a reporter, is about doing your homework, and really understanding – and I know you guys (Full Send) got carte blanche because Dana’s (White) f*cking partnered with you guys, but f*cking do your f*cking homework. And grow a better culture. Stop giving bad culture to kids.”

When the reporter in question attempted to defend himself and explained how he had reached out to Vera’s manager, Jason House to explain the gift, Rockhold urged him to do his homework. And when pressed if he consumed any other Full Send content, Rockhold replied, “No, no I don’t.”

Rockhold then denied that the reporter “appreciated” him as he had said as their interaction ended, saying, “You don’t – and I don’t (appreciate) you either.”