LowKickMMA.com
Home Boxing News Watch: KSI faces off with two fighters he will face back-to-back on... 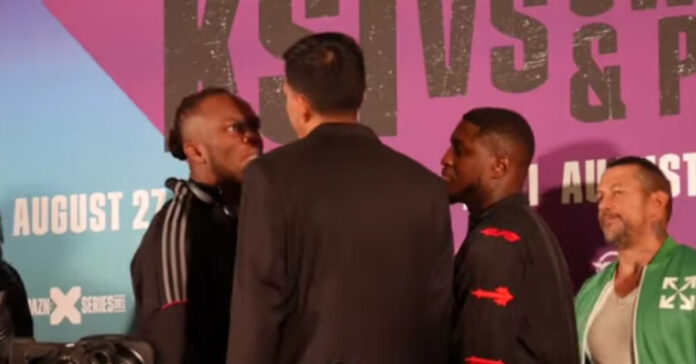 29-year-old Olajide Olayinka Williams “JJ” Olatunji, better known by social media fans and combat sports enthusiasts as KSI will face not one, but two challengers on the same night. Emanating from the famous O2 Arena in London, KSI will take on English rapper and boxer Swarmz and Mexican professional boxer Luis Alcarez Pineda.

Ahead of the highly-anticipated event, KSI went face-to-face with both of his opponents at the same time before they square off on Saturday night.

Originally scheduled to face Alex Wassabi, the American pulled out of the fight due to injury. While resident ‘Problem Child’ Jake Paul offered up his services following his own fight’s cancellation, KSI went a different route announcing that Swarmz would step in to take Wassabi’s place. Fans were less than impressed with the replacement and quickly accused KSI of intentionally choosing a weaker opponent for his showing at the O2.

In response, KSI initially brought in Bulgarian fighter Ivan Nikolov to compete in a second fight with the YouTube star on the same night. With a record of 3-16-0, Nikolov did not appear to be much of a threat, but the fact that KSI was willing to face both fighters back-to-back on the same night had piqued the interest of fight fans. Shortly after the announcement, Nikolov was promptly removed from the bout after being exposed for having ‘neo-Nazi tattoos and white supremacist beliefs.’

KSI commented on Nikolov’s removal from the contest and announced that Luis Alcarez Pineda would be stepping up to take his place keeping the two-fight main event intact.

“I replaced my second opponent because… he’s a white supremacist,” KSI said in an interview with The Sun. “Ivan isn’t my opponent anymore. He has been removed. The matchmaker also got fired for allowing this to happen in the first place. But yes, my new opponent is Luis Alcarez Pineda. He has a better record to be honest, 2-5, so he hasn’t lost as many times as Ivan. He’s Mexican, younger as well, 23.”

Pineda enters the bout with a record of 2-5-0, a losing record albeit better than that of Nikolov. The Mexican fighter has scored two unanimous decision wins over Pablo Poom Leal and Jose Adolfo in his professional career.

Although KSI opted not to take Jake Paul up on his offer to step in and face him in London’s main event, the YouTube star claims to have every intention of taking on ‘The Problem Child’ when he feels he is ready.

“I want to f*ck him (Jake Paul) up, essentially. But in order to do that, I need to be constantly testing myself, pushing myself, and seeing how far I can go. I feel like even fighting two people in one night is a perfect way to do that. No one else has done it that I know in recent years, especially in YouTube boxing. I thought ‘hey, I’ve got good stamina, I’m ready, I feel confident in general and in myself, so let’s get it.”