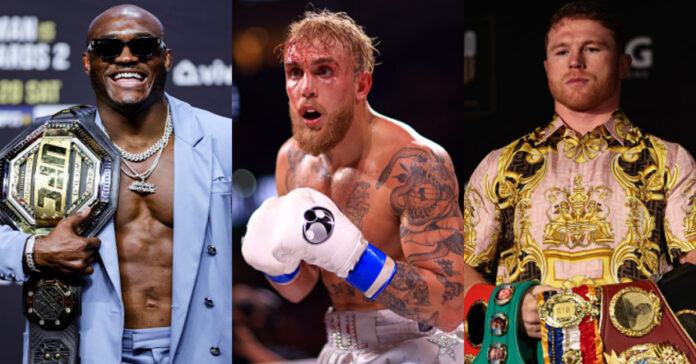 The UFC’s No. 1 ranked pound-for-pound fighter in the world Kamaru Usman is just days away from defending his welterweight crown against No. 2 ranked contender Leon Edwards at UFC 278 on August 20th.

With another big title defense on the docket, ‘The Nigerian Nightmare’ is looking at a potential career change, dipping his toe into the world of professional boxing. Many current and former UFC fighters have expressed an interest in boxing. Over the last few years, former world champions Vitor Belfort, Anderson Silva, and Conor McGregor have all competed in high-profile boxing bouts.

MMA fighters’ interest in crossing over to boxing has seen a significant increase in popularity since the emergence of YouTuber turned pro boxer, Jake Paul. ‘The Problem Child’ has seen gains in his popularity and in his bank account following scraps with former MMA standouts Ben Askren and Tyron Woodley. Kamaru Usman recently discussed his desire to step into the squared circle, but not necessarily against the fighter that everyone seems to be calling out these days.

“Listen, me and him (Paul) get in a scrap right now, he could touch me. I’m not naive or ignorant enough to think – let them put it on the news,” Usman said. “I’m a realist. I know I’m gonna dog walk him, but at the same time, everyone has a puncher’s chance.”

Before Kamaru Usman can step into the squared circle, he will step into the Octagon for his sixth defense of the welterweight world title he took from Tyron Woodley at UFC 235 in 2019. In his previous five defenses, Usman has only faced three different opponents. Colby Covington and Jorge Masvidal have each had two opportunities to take Usman’s gold while Gilbert Burns had his chance back at UFC 258.

Leon Edwards has been waiting patiently for his title opportunity. In the process, ‘Rocky’ has gone on an incredible nine-fight win streak. His last loss came against Kamaru Usman himself in 2015. Now Edwards gets the chance to not only become a UFC champion but avenge the last loss of his MMA career.

The opening odds had Kamaru Usman as a -250 favorite while ‘Rocky’ was the clear underdog at +210. Since then, the odds have widened a bit with ‘The Nigerian Nightmare’ sitting as a -340 favorite versus the now +280 Edwards. It’s clear that the oddsmakers believe the showdown at UFC 278 will bring the same result their 2015 bout did, but one of the great things about combat sports is that anything can happen.

Will Leon Edwards capture his first UFC championship or will Kamaru Usman continue to reign supreme over the welterweight division?