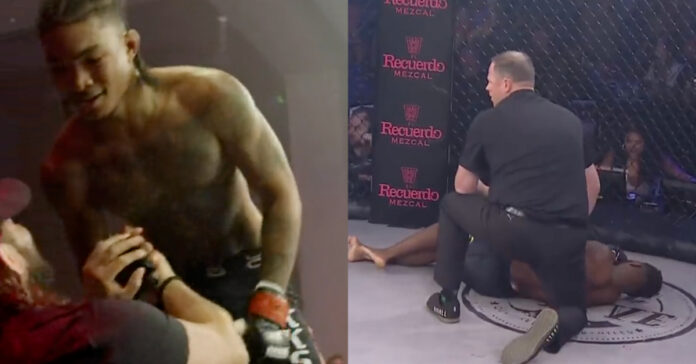 Jorge Masvidal’s promotion, iKON FC, returned last night in Savannah, Georgia where up-and-coming fighters competed to impress in what is a great opportunity for rising stars to stamp their mark on the MMA landscape, with the full card being shown on UFC Fight Pass.

None quite stole the spotlight as bantamweight Malcolm Wellmaker. The 28-year-old would make it 2-0 as a professional, knocking out Langton Sykes in emphatic fashion.

Wellmaker would start the proceeding with a jab, before he would fake another one, drawing a reaction from Sykes. Wellmaker would launch a tight left hook counter as Sykes attempted to load up on a big right hand, completely shutting Syke’s lights out, forcing the referee to stop the video.

The Augusta fighter would then calmly walk towards and celebrate with Masvidal, who was cage side for the event. Watch the videos below:

What’s Next for Jorge Masvidal?

We have not seen ‘Gamebred’ compete since his wide decision loss to bitter rival Colby Covington back in March. Although Masvidal has seen a skid in terms of performance along with some out-of-the-cage problems, the BMF champion is as ready to fight as ever and still holds the No.8 ranking.

The likelihood of Masvidal competing for a title any time soon is very low, but he will bring name and selling power to any bout. It is unlikely that he will likely be fighting any up-and-comers like Sean Brady any time soon, with bigger-named, seasoned veterans much more preferable.

A matchup with Gilbert Burns seems the most logical next step in terms of rankings and fights that are already booked. Burns has also seen a surge in popularity following his brave display against Khamzat Chimaev.

What did you think of Jorge Masvidal’s iKON FC?