LowKickMMA.com
Home UFC News Jorge Masvidal Was Kicked Out Of ATT For ‘Trying To Assault’ Colby... 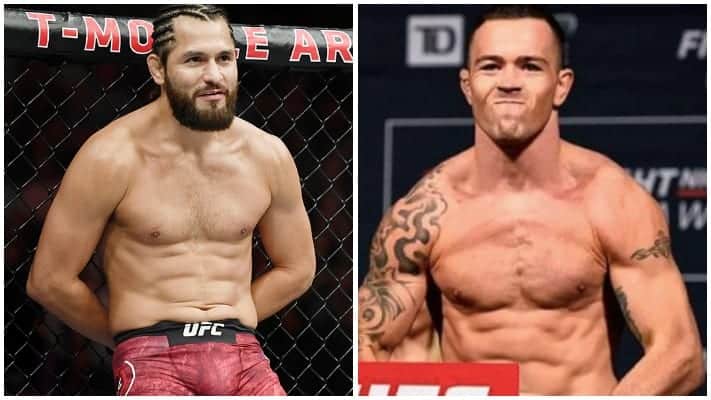 Unless you’ve been under a rock, you know that Jorge Masvidal and Colby Covington stop being friends long ago. Well, Masvidal revealed the rivalry got him booted from American Top Team briefly after attempting to assault Covington.

In a recent interview with ESPN’s Ariel Helwani, Masvidal shared that Dan Lambert kicked him and Covington out of ATT. (H/T BJPenn.com)

“Colby’s that one person and I always say this, when I see him, it is a free pay-per-view right there. He knows that and that’s why he used to make videos going ‘this guy’s so unprofessional and he tried to fight me on the street.’ I got kicked out of the gym for trying to assault him one time,” Masvidal told Hewwani.

“I used to go to spots that he would frequent a lot and got the police called on me and things like that. I know a lot of people think, man you’re an idiot, you’re a professional fighter why would you do that. Because I f*****g feel like it and nobody tells me what to do. It is more loyalty to me. You can’t do something wrong to someone I love, it just isn’t going to happen.”

The well-documented feud has continued to heat up over the last year. Other names (notably Ben Askren, Dustin Poirier, Joanna Jedrzejczyk, and Kumaru Usman) have surfaced amid their war of words. Still, Masvidal had repeatedly stated that the beef started when Covington wronged a mutual coach.

Many speculated the two would get the opportunity to settle their beef in the octagon in the early part of 2021. However, this isn’t the case; Masvidal is now scheduled for the rematch with Kamaru Usman for the belt. It appears we will all have to wait a little longer to see Masvidal and Covington finally settle their differences.

Do you think Jorge Masvidal was wrong to attack Colby Covington in the gym?