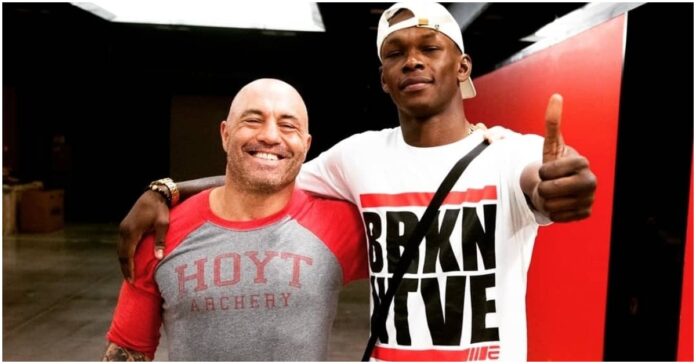 The UFC commentator and popular podcaster has found himself in hot water as of late for a couple of different reasons.

Rogan first faced backlash for spreading what many believe to be COVID-19 misinformation on his show.

More recently, Rogan was forced to apologize after a compilation of him using a racial slur appeared online.

The 54-year-old has found allies in UFC fighters of all races during his recent turmoil. ‘Stylebender’ is the latest high-profile MMA figure to speak out in defence of the UFC icon.

“Understand that. And you know, f*ck the noise, man. You know what they’re trying to do. You can’t control the man and he’s got the biggest platform in the world right now so that’s my n*gga Joe Rogan. F*ck the noise. Keep doing you, Joe. Have some mushrooms.” (Transcribed by MMA Mania)

Spotify has faced intense pressure as of late to cut ties with Rogan but the streaming giant refuses to do so. Its CEO Daniel EK recently told his employees that despite being appalled by Rogan’s past use of racial slurs, he won’t be cutting ties with the most successful podcaster on Earth.

“While I strongly condemn what Joe has said and I agree with his decision to remove past episodes from our platform, I realize some will want more,” Ek said. “And I want to make one point very clear – I do not believe that silencing Joe is the answer.”

Do you stand with Israel Adesanya on the Joe Rogan debacle?