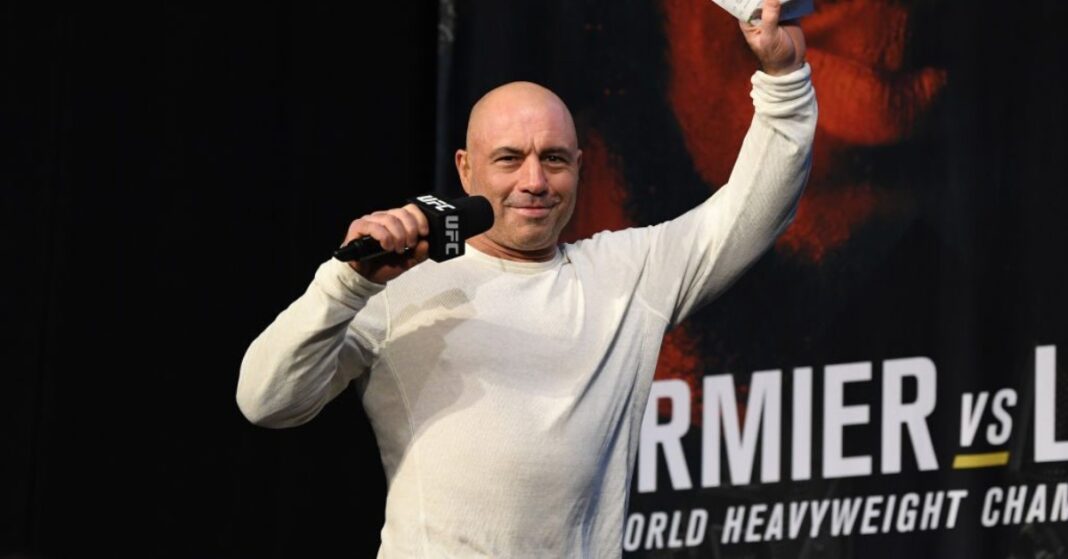 UFC color commentator, podcast host, and standup comedian, Joe Rogan has issued an apology after a video clip emerged across social media on Friday, detailing multiple repeated use of the n-word from his podcast, The Joe Rogan Experience, and during a standup set of his.

Rogan, who has also been involved in more controversy in recent weeks when musicians, Joni Mitchell and Neil Young both requested their respective libraries removal from the streaming platform, Spotify after accusations were levelled at Joe Rogan who is accused of promoting “dangerous misinformation” regarding the COVID-19 pandemic and vaccination.

In May 2020, Rogan penned an exclusive deal with Spotify which would see the streaming platform hold exclusive rights to air and stream full episodes of his long-running podcast, The Joe Rogan Experience – in a deal reportedly worth in excess of $100 million.

Receiving major criticism on Friday, Rogan was the subject of a video clip released on Twitter by R&B artist, India Arie, where the podcast host and UFC color commentator repeatedly uses the n-word during multiple episodes of his podcast, as well as during a standup set.

As a result, Arie released a separate video, where she also requested the removal of her music library from Spotify, with the video compilation showing no fewer than 23 instances of Rogan using the n-word.

Addressing the compilation on his official Instagram, Joe Rogan explained how the clips involved in the compilation were taken out of context, claiming how in many instances he was quoting bits from fellow standup comedians, Paul Mooney, and the late, Richard Pryor.

“I know that, to most people, there’s no context where a white person is ever allowed to say that word, never mind publicly on a podcast,” Joe Rogan said. “And I agree with that now. I haven’t said it in years. But for a long time when I would bring that word up, like if it would come up in conversation, instead of saying ‘the n-word’ I would just say the word. I thought as long as it was in context, people would understand whart I was doing. Like that context was (in) part of the clip we were talking about was Redd Foxx, how Redd Foxx said that word on television in the 1970s and how times have changed so much since then; or about how Richard Pryor used it in a title of one of his albums or how I was quoting a Lenny Bruce bit: or I was quoting a Paul Mooney bit; or how I was talking about how Quentin Tarantino used it repeatedly in ‘Puip Fiction’; or I was talking about how a Netflix executive ironically used it because he was trying to compare it to another offensive word, he said it out loud, and they fired him – not calling anybody a word, just saying the word out loud.”

“I was also talking about how there’s no another word like it in the entire English language because it’s a word where only one group of people is allowed to use it, and they can use it in so many different ways. If a white person says that word, it’s racist and toxic. But a black person can use it, and it can be a punchline, it can be a term of endearment, it can be a lyric in a rap song, it can be a positive affirmation. It’s a very unusual word, but it’s not my word to use. I’m well aware of that now, but for years I used it in that manner. I never used it to be racist because I’m not racist, but whenever you’re in a situation where you have to say, ‘I’m not racist,’ you f*cked up. And I clearly have f*cked up.”

Joe Rogan then recounted a story he said on an episode of his podcast, where he appears to compare a theatre of black people to apes, when he went to watch the film Planet of the Apes in a black neighborhood.

“We got really high, we were in Philadelphia, and we went to go see ‘Planet of the Apes’,” Joe Rogan said. “And we didn’t know where we were going; we’d just got dropped off by a cab, and we got dropped off in this all-black neighborhood. And I was trying to make the story entertaining, and I said, ‘We got out, and it was like we were in Africa. It was like we were in ‘Planet of the Apes’. I did not, nor would I ever say, that black people are apes, but it sure f*cking sounded like that. I immediately afterwards said that’s a racist thing to say. ‘Planet of the Apes’ wasn’t even in Africa. I was just saying there’s a lot of black people there. But then I went on to talk about what a positive experience it was and how much fun it was to go see this move in a black neighborhood. It wasn’t a racist story, but it sounded terrible.” (Transcribed by MMA Junkie)