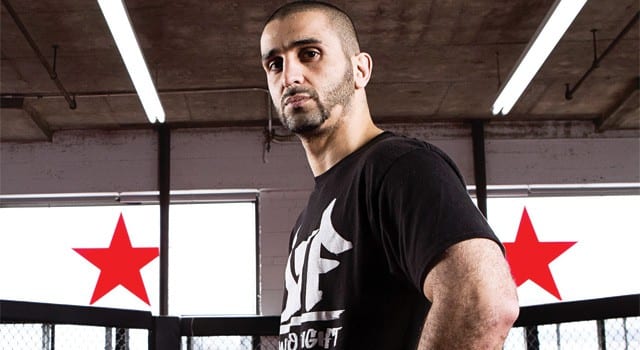 Firas Zahabi is the son of Lebanese immigrants that migrated to Montreal, Quebec, Canada. From an early age it was instilled in him to work hard for anything he wanted in life.

Before he even knew what MMA or Jiu Jitsu was, he was passionate for American football. He played in local leagues with his brothers throughout their childhoods and religiously followed the NFL.

It wasn’t until he was 18 years that he discovered MMA and Jiu Jitsu in particular. Firas Zahabi got a hold of a VHS copy of the UFC 2 event featuring Royce Gracie.

From his little martial arts knowledge at the time, he assumed the smaller Gracie would get killed by the bigger fighters. He couldn’t believe what he saw as Royce Gracie easily beat all of his much larger opponents. Using a martial art called “Brazilian Jiu Jitsu” that was designed for smaller men to defend themselves against bigger men.

After watching the event, the only thing Firas wanted to do was learn the art of Brazilian Jiu Jitsu. He made it his mission that he would dedicate his life to learning this martial art.

Zahabi would have trouble finding a place to learn as there were no legitimate Jiu Jitsu schools in Quebec during 1998. Since he had no school to train in, Zahabi would begin studying Jiu Jitsu and learned what he could at home.

He would go to every library and video store he could to find books and Jiu Jitsu instructional videos. Making his brothers and friends roll with him and drill any techniques he came across.

When Firas Zahabi was around 20 years old, he discovered a fight gym in Quebec called Tristar Gym. At Tristar, they had a Jiu Jitsu program run by a Renzo Gracie purple belt named Angelo Exharkos.

Once Firas found Tristar, he would spend all of his free time on the mat learning Jiu Jitsu. He would also do Muay Thai training, but his love was Jiu Jitsu.

In just six months, Zahabi would earn his BJJ blue belt. A short time later, he would become a part time coach since Angelo could only coach 3 days a week.

Then Angelo could no longer coach at Tristar, so Firas was offered the head coaching position. Once he became head coach, Firas made the gym exclusively No-Gi and would go 9 years without training in the Gi.

When Firas wasn’t teaching Jiu Jitsu classes, he would be studying for a Philosophy degree at Concordia University. Due to all of his time being spent coaching and studying, Zahabi never had time for a fight career.

In 1999, Nova Uniao black belt Wagnney Fabiano opened his Jiu Jitsu school in Montreal. At the time, Firas was still a blue belt and needed to learn from a black belt and develop his skill. Every week, Firas Zahabi would take a trip to Fabiano’s school and learn new techniques to improve his Jiu Jitsu.

But instead of selling Tristar, Plas saw how dedicated Zahabi was and let him run the gym. A few years later, Firas Zahabi would buy the gym from Plas and achieve his dream of owning his own gym.

As luck would have it after becoming the owner of Tristar, Firas Zahabi would meet UFC fighter Georges St Pierre. Who even then was considered one of the best fighters in the world.

GSP was just coming off the biggest loss of his career at UFC 69 to Matt Serra. One of the biggest upsets in UFC history.

After the loss, GSP wanted a fresh start and was looking for a new head MMA coach. Since he was also from Quebec, he met with Firas and the two had an immediate connection. It would prove to be one of the best duos in MMA history.

Pierre also trained with John Danaher at Renzo Gracie’s school in New York City. Danaher also happened to be a philosophy major, so he and Firas had an immediate connection.

They shared the same philosophies about training and were vital for GSP’s success. Zahabi began training Jiu Jitsu under Danaher in 2007 and would later earn his black belt in 2011. Achieving the dream he had since he was 18.

After Firas Zahabi became GSP’s head MMA coach, he immediately became respected as one of the best minds in the sport. Under Firas’ guidance, GSP would never lose another fight in his career.

With the help of Firas, GSP would make a comeback at middleweight to fight Michael Bisping for the championship. He didn’t lose a step and would beat Bisping by rear naked choke to become a two division champion. Also one of the greatest MMA fighters of all time.

Firas’ other most notable fighter is former UFC fighter and Bellator champion Rory MacDonald. Rory is considered one of the most cerebral fighters in the sport.